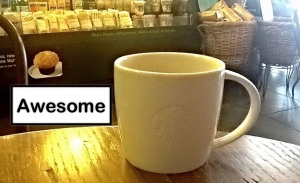 I generally reserve the word “awesome” for things that are exceptional. The baristas at Starbucks have a somewhat lower threshold, it seems.

“What kind of bagel would you like?”
“Whole wheat please.”
“Awesome”
I must have made a good choice.

“Would you like it toasted?”
“Yes, please”
“Awesome”
Toasted must be good.

Now, I always thought that John is a pretty solid name. Not unusual. Simple, Biblical, and practical but with a touch of gentleness added by the curving “J”. I like being John. But never thought of it as an awesome name.

These girls are making me feel pretty good about myself. Awesome name, awesome choices. Awesome taste.

I sit down with my coffee feeling … awesome.

The next customer comes up to the bar.
“What kind of bagel do you want, sir?”
“Plain, please. Not toasted.”
“Awesome!”

Wait a minute here. The awesome choice is whole wheat and toasted.

Then the barista says “Awesome” as she writes “Marvin” on the guy’s cup.

She hands him his coffee.
“Here you are, sir”
“Awesome” Marvin says with a smile.

I realize that these pleasant upbeat responses are not to be taken literally. When I looked up slang equivalents of “awesome” there were 341 entries ranging from “fantabulous” to “sick” and from “wicked” to “bomb-diddley”. I will admit that if the barista responded to my choice of bagel with “bomb-diddley” it would have taken me aback. And recognizing everything about me as “awesome” momentarily and in my sub-conscious mind made me feel special. That was the intent and it worked. I’ll take it. 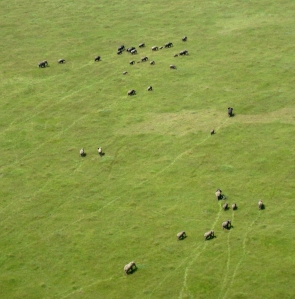 Watching from the cockpit of a small plane as a herd of elephants crosses the African savannah….now that is Awesome.

But as I thought about it, I also started to mourn the loss of the word as I use it. Calling the view over the Rift Valley or a towering redwood cedar in the Rainforest on Vancouver island “Awesome” puts it in the same category as my toasted whole wheat bagel. I will have to look for some different superlatives.

Now, you have an awesome day… in every sense of the word.