It’s strange how the mind can wander. Or at least mine can.

I had a brief Facebook interaction yesterday with friends in which I referenced Mohammed Ali with his well known “floats like a butterfly, stings like a bee” comment. It immediately called up a memory of being on holiday with my family in Western Canada in July 1963. I was a month away from turning 16 and Sonny Liston had just beaten Floyd Patterson to become heavyweight champion of the world. But Cassius Clay (he changed his name to Muhammed Ali a couple of years later) was able to immediately upstage Liston with a challenge and prophesy, “Liston’s not great, he’ll fall in eight.” I was not at all interested in heavyweight boxing at the time but I still remember being in the car and hearing this on the radio as we travelled through Manitoba. I also remember watching a solar eclipse through exposed film two days earlier and having vivid recollections of listening to 13 year old “Little Stevie Wonder” singing Fingertips Part 2. I bought the record – a “45” – when we got home.

Rehearsing for my role as Mr. Spettigue in Girl Crazy-1963

I started wondering what else was going on in 1963. I was going into Grade 12 at London Central Collegiate Institute. I was a nerd. I wore corduroy flood pants and sweaters with designs on them. I was into many extracurricular activities, including playing the role of Mr Spettigue in Girl Crazy and dressing up as Quack version of Bess the Landlord’s Daughter in an election skit for my friend Daphne Ward (now Bice). Her campaign theme was centred around Daffy Duck. She didn’t win. The Daffy Duck approach has not been used by politicians since.

I remember sock hops in the gym. I wonder what became of teachers like Hunk Wyatt, Miss Wyanko and Mr Webb who all seemed absolutely ancient (they taught my mom, in fact) but who were all likely younger than I am now. 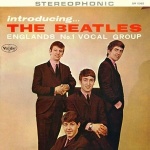 The Beatles released their first hit, Please Please Me in early 1963 and this was followed by other singles and an album…in stereo. They had not yet appeared on the Ed Sullivan Show but Beatlemania was sweeping the UK in 1963. Their long hair verged on scandalous.

Gasoline cost 29 cents a gallon (not litre) and a loaf of bread was 22 cents.

Alfred Hitchock’s “The Birds” was a popular movie along with Elizabeth Taylor and Richard Burton in Cleopatra. Ron Howard was Opie on the Andy Griffith’s Show.

You will be familiar with Bob Dylan’s song, “Blowin’ in the Wind” made popular by Peter Paul and Mary in 1963 but you may not have heard Eydie Gorme’s “Blame it on the Bossa Nova.” Does any body do the bossa nova any more? Blame that on Eydie Gorme.

By far the most memorable event of 1963 was the assassination of John F. Kennedy. I remember the moment that news broke. I recall where I was sitting, the teacher and in the classroom I was in when the principal of the school broke into the lesson over the PA system. I spent the rest of the dreary November weekend glued to the black and white TV that was in the corner of my grandparents’ living room as the rest of the drama, including the shooting of Lee Harvey Oswald, unfolded.

Earlier in the year, Martin Luther King gave his “I have a dream” speech and racism and civil rights were paramount in the news. Civil rights movements were being met with violent opposition and it took policemen to allow two black students admission to the University at Birmingham Alabama. Fifty years later the President of the United States is African American. A significant change for the good within my adult lifetime.

It is weirdly wonderful to me that I can remember these events from 50 years ago so vividly. Lots of images and experiences filed in there somewhere.

Oh, and just in case you think I am showing my age, Johnny Depp and Brad Pitt were both born in 1963 which makes them 50 this year. Time marches on.

My grade 12 class in 1963. I am in the top right with the V-neck sweater. Over the years, my head has grown into my ears.
At the far right in the first row is Lorna Harris . Lorna and I are still great friends after these 50 years, corresponding regularly by Facebook and email. An enduring friendship. Could we ever imagine what the next 50 years would bring?