As my friends know, it is not like me to be “speechless”. But I have had great difficulty finding the right words for this blog article. I will try.

The word draconian seems an understatement when it is used to describe the anti-homosexual law signed two days ago by Uganda’s President Yoweri Museveni.

(Draco,by the way,  was a legislator in ancient Greece who is renowned for passing laws that called for particularly harsh punishment for offenses that were minor.)

In the past few months a large divide has developed between countries that see the rights of gay individuals as being basic human rights and regions where homophobic rhetoric has led to laws that are punishing and restrictive. The debate over Russia’s laws punishing anyone who “promotes” homosexual lifestyle became overshadowed by the fireworks and glistening white snow of the Olympics. The Olympics are done but the law remains.

In Arizona, recently, the state government passed a law that would allow restaurant owners to refuse service to gay clients, the argument being that it could be against the restauranteur’s religious beliefs. This law has not yet been signed by the governor but it was obviously supported by the legislature.

This week, in Uganda, the president signed a law that called for imprisonment up to 14 years for individuals who participate in homosexual acts and life in prison for “repeat offenders” or individuals with HIV who have gay sex. (The original version of this law actually called for the death penalty for some homosexual “offenses”.) The current law also calls for imprisonment of anyone “aiding or abetting” homosexuality and makes it a criminal offense not to report someone for being gay.

Museveni claims that homosexuality is unnatural behaviour that can be controlled. He claims that the west is trying to lure Ugandan youth into a deviant homosexual lifestyle and has directly thumbed his nose at he U.S. and Obama in particular over this issue. He claims to be resisting “Western social imperialism.” Although it is hard to believe, in an interview with Stephen Fry, one Ugandan government minister reportedly has even said that rape of a young woman is less problem than consensual gay sex because it is more “natural”.

In neighbouring Kenya, there are laws in place that outlaw homosexuality but they are rarely enforced.  Still, there is a widespread intolerance and disapproval of homosexuality in Kenya and there are reports of people being brutally killed in some African countries because of their sexual orientation. But let’s not be too smug here. “Gay-bashing” has been (and still is) alive in North America, too. 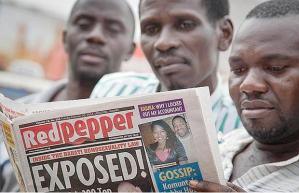 Today, the day after the law was signed, a prominent newspaper in Kampala, printed names of 200 Ugandan homosexuals, many of them prominent citizens and not publicly “out”. This may lead to a backlash of not-so-subtelly-sanctioned harassment and even violence against gays. At least one gay activist was brutally murdered a couple of years ago after a similar newspaper outing. Many gays in Uganda claim to have been beaten and are understandably afraid. There are disturbing photos posted online of one fellow being burned alive, children watching, ostensively getting his just desserts for being homosexual.

What also angers me even more about this, whether it is in Arizona or Uganda is that it seems to be a sentiment that is pushed by Christian Evangelists. The anti-homosexual rhetoric in Uganda certainly has its foundation in religious zealots who may be losing their cause in the West but turning to vulnerable communities in Africa to promote this kind of intolerance and hatred. Even the head of the Anglican Church in Uganda has expressed support for this law. This is “Christian”? Really? I find it incomprehensible.

In some reports, I have also read that the Ugandan law calls for jail terms for directors of non-governmental agencies that support gay rights or gay individuals. Although the charity that I work with has no connection with any gay rights groups, we do support clinics and schools where we hope that all individuals will be treated with respect and dignity, regardless of their race, religious beliefs, age, sex or sexual orientation. We support the rights of all people. Will all clients and students be treated with respect? We do expect that. We may have Canadian supporters who are gay and who wish to visit our project partner sites? Can they be safe to do that now?

As a fall out, several countries, including the Netherlands, Denmark and Norway have announced today that they will withdraw governmental aid from Uganda. Canada has expressed disagreement with the new law but the official stance is not yet clear. To withdraw aid may make a principled statement but, as usual, those who will suffer will be the vulnerable people who live in poverty with no political power.

Societies differ. I can understand certain groups rejecting the idea of homosexuality or disapproving.  It may be totally outside their sphere of understanding or culturally “wrong”.  But punishment with life imprisonment for simply being homosexual is not tolerable. The argument that sexual orientation is a choice, that gays are “recruiting”  Africans to their lifestyle or acting like pedophiles is ludicrous.

Where will this all end? In Canada, we have debated and had strong disagreements  whether same-sex marriage will have the same legal rights as marriage between a man and woman. In some countries the debate is more whether a homosexual has the right to exist. Centuries from now laws like this may be termed as Musevenian, not Draconian.

5 thoughts on “Replacing the word “Draconian” with “Musevenian””