This year, Health Canada is playing  an April Fool joke on Canadian physicians. Only it is no joke.   Starting April 1, licensed medical practitioners will be able to prescribe marijuana for their patients, something that previously had to go through more elaborate scrutiny by Health Canada. 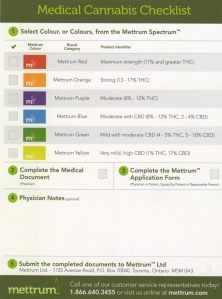 Last week in the mail I got the first advertising supplement for a company now producing it, complete with a tear-off prescription pad that allows me to just check  off the dose and type that I want to prescribe…or more likely that the patient wants me to prescribe.

I have no training in the appropriate use of this drug as a medicine.  In fact, there have been no good studies that have shown where to use it or how.  Most of the time it is the patient that comes to the physician to say they have been buying it illegally and finding it helps them with their nausea, chronic pain or muscle complaints.  Perhaps it does.  But the benefits of using this drug are generally subjective and for poorly measurable outcomes. How can I evaluate who needs it for medical reasons and who just wants to have medical sanctions to use it for recreational use?

Most users of marijuana don’t use it for medical reasons.  They use it to get some psychological benefit or a “high” on some level. It provides temporary relief from life’s trials and tribulations. For some it becomes a regular habit, an escape and perhaps an impediment to solving problems in a more constructive way.

I smoked marijuana on a couple of occasions several years ago. (Should I run for Prime Minister?)  I have no qualms about others using it responsibly and occasionally to relax.  I like the smell of it. But it makes me feel horrible!  Either it does almost nothing to me or it makes me extremely anxious and nauseous. Not a sensation I ever want to repeat. I will stick to a glass of red wine for my relaxation, thanks.  How long will it be before I am asking my doctor for a prescription for Chateauneuf-du-Pape?

Already, doctors are in an unenviable position of being a gatekeeper for some narcotic prescriptions that are often abused, trafficked on the street.  The problems with Percocet prescription in Ontario are huge.  Granted, there are some patients who may get relief from painful medical conditions by using this drug but the consensus is that it is not appropriate for chronic non-malignant pain, that it has a significant potential for dependency and abuse and that much of the Percocet prescribed by physicians ends up being sold on the street. And we know that regular users will suffer significant symptoms of withdrawal or acquire it on the street if the medication is stopped suddenly. It is a troubling dilemma for many physicians.  Often the drug has been started by another physician and the patient is already dependent and reluctant to change their use of the narcotic when he enters the practice.  The new doctor inherits a problem she did not create and then is stuck trying to deal with it.  Will the same happen with medical marijuana? Narcotic abusers can be very manipulative, demanding and even threatening.

I view this change now allowing me to prescribe what is currently a common street drug as the start of another ethical dilemma for me and for all physicians. It is not what I signed up for when I became a  doctor. Maybe I am just too old to be doing this any more.  Or, like the referees I read about this week who are leaving junior hockey because the job has put them in unpleasant situations, maybe I should just retire.