Tonight I experienced a different sort of Christmas Eve from the many I have had before.

Before I start, let me add, that my three kids and five grandchildren were all with me on the weekend and we had a really wonderful celebration of the season.  The next day I headed to Longboat Key, Florida to a time share that I have “owned” for 35 years. In fact, my family spent a few Christmases here many years ago.

Today, despite being about 27 degrees C there was rain on the horizon so I jumped on the Longboat Key trolley into Sarasota to a movie. Review to follow.

The movie was out at 6 and the next trolley back to Longboat was not for an hour. As I walked up the street it looked pretty deserted, only a few people hanging about looking somewhat inebriated by the bus station.  I was early and across the street was a bar that seemed to be hopping.  So I went over to grab a beer while waiting for the bus 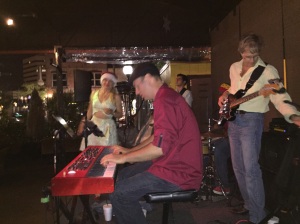 Tables were full but there was a place for me at the bar, right beside the band.  What fun I had waiting for the bus.  After only one beer I was definitely into the Christmas spirit, toe-tapping and smiling ear to ear and singing along. If my bus was not due I would have stayed for a second.

At the bus station I sat near three guys who were happy to be together, no money but spending Christmas Eve w 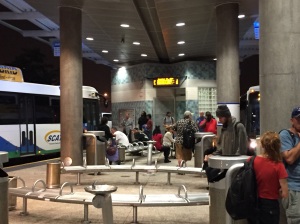 ith each other. Friends.  After a lot of hugging and Merry Christmases they decided that they had 17 minutes until their bus arrived and they should go get a beer. My suspicion is that they would miss their bus.  But it was actually heartwarming to see them enjoying each other’s friendship and feeling festive despite their circumstances.

As I got on the bus it started to pour rain.  I was the only rider.  It was like having a chauffeur back to my condo and the rain let up just as I was to get off the bus 100 metres from where I am staying.

For Christmas, my daughter Heather had given me some US$ to spend on entertainment while on holiday.  Today, for $22 I got transport in and out of Sarasota, a movie a beer, a tip for the bartender and $5 for a guy sitting beside me who was listening to the music but had no money to buy a drink.  A priceless Christmas Eve.

The evening was memorable.  I am still smiling and feeling very Christmasy despite being here on my own and it being warm outside.  I am happy.  I hope your Christmas Eve has some memorable moments too.

3 thoughts on “A Sarasota Christmas Eve”