While I indulge myself for a few days in Toronto seeing films at TIFF, you will have to indulge me as I feel obliged to record my opinions about the movies I see…and I have 9 of them on my schedule so buckle in.

In addition to the usual well-hyped potential blockbusters there are over 400 movies to chose from during the festival and I try to mix in some from other parts of the world.  I have a soft spot for Africa so I usually pick a couple of African films in my menu. 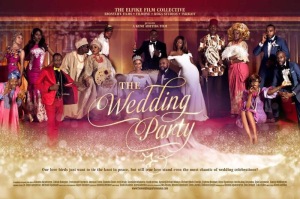 I started last night with The Wedding Party, a Nigerian-made film that is one of a number of films at TIFF this year liming Laos with Toronto and giving exposure to film makers from that country.  The term Nollywood has been thrown around to identify these presentations.  This one was  disappointment to me although I am not sure exactly what I expected.  Maybe something with a little more originality or substance.  The premise is the well-worn plot (term used loosely) of a wedding where families squabble, bridesmaids flirt with the groomsmen, the wedding dress gets damaged…add your own from any number of similar stories and you will find it here.   The screenwriting was abysmal and the direction amateurish. The soundtrack, with the exception of a few African dance tunes, was just bad. As was some of the acting. There was lots of colour and dancing that gave a taste of the lively African engagement with rhythm and movement but even that went on a bit too long.

Top it off with a cast and production staff that were on “Africa time”, keeping the audience waiting for 10 minutes for them to arrive from the bar for the Q and A. Several invited Nigerian guests came in late to the film, occupied the Reserved row of seats and texted, took phone calls and even videoed snippets of the film ( a definite TIFF no-no).

You won’t have to worry about seeing this film in North American theatres.  Maybe it will be more appealing to African audiences.  I will give it two stars out of five and that is somewhat charitable and acknowledging that Nollywood is trying.

On my way to my next film I caught a glimpse of Ewan MacGregor, waving to fans through the open window of his limo as he left the premiere of American Pastorale. My second film of the evening was a world premiere public showing of  Trespass Against Us, a film about a marginalized family of lawbreakers that were the Irish equivalent of the Avery family from Making a Murderer.  Michael Fassbender and Brendan Gleeson portrayed the main characters,  apparently in a reasonably true depiction of a real family.  I had a little trouble, sometimes, with the broad Irish accents that may have made me miss some of the subtleties of the dialogue.  I loved the photography, however, much of it done with a Steadicam, giving a frenzy and energy to much of the action – great car and foot chases with skilled photography and editing putting you right in the action and raising your heart rate.  The film is worth seeing, but in a theatre on a big screen, for this energy alone. There was an interesting collection of characters but I would have to say that I didn’t get invested in any of them.  I will give the film three and a held stars out of five with particular kudos to the DP – Director of Photography.

The Irish flavor whetted my appetite for the upcoming October King’s Town Players production of Cripple of Inishmaan. (Shameless promotion on behalf of KTP).