It is 7 pm on Sunday and I have sacral ulcers.  The Kingston Canadian Film Festival is drawing to a close after presenting a wonderful collection of Canadian films – or at least films made by Canadians – over the past four days.  I have attended  8 films since Thursday night (and also worked in a train trip to Toronto yesterday to see Book of Mormon) and although I would like to see the one remaining film tonight, my bottom can’t take it.

Here are some of the offerings that I saw – there were many more – and how I felt about them.

The River of My Dreams – a biopic outlining the career and personal life of Canadian TV and Film star, Gordon Pinsent.  Pinsent is a great story teller and I imagine over the years the stories have become somewhat embellished.  It was interesting to see his journey through CBC to Hollywood and back to Canadian films.  I was a bit thown off and suspicious when he consistently avoided breaking the fourth wall.  His eyes were always glazed away front the camera.  Now, this is imperative when you are acting in a film but it stops any form of connection in an interview.  Made me think that I was watching yet another performance.

The Stairs is a really interesting documentary-style film that follows a few Toronto people who have had trouble with cocaine addiction and gives a glimpse into their daily lives.  The people interviewed had a great sense of humour and unlink Pinsent, talked to us, looking at the camera from time to time.  Much more personal.  It was a disturbing look at addiction and struggle right on our own streets.

Jerusalem, We Are Here was not really a film but a multimedia presentation that explored neighbouthoods in Jerusalem where the houses had been owned by Palestinians prior to 1948.  It was a bit of a guided tour through the neighbourhoods with written text, audio and video clips of  families who had owned (and technically still own) some of the homes.   It was not really a film and this put me off a bit.  And interesting project but really something for the film festival? 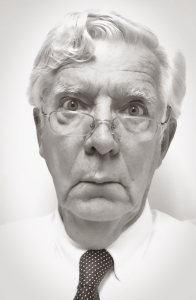 Dr Dan Orland in The Twisted Tale of Emma Surely.

Epic Shorts.  I went to this collection of eight short (15 minute limit) films because I had a role in one of them.  It was a bit of an anxious time since I had not seen the film since we shot it in November and had absolutely no idea how it would look.  More on that experience another time, perhaps.  I survived the crisis.  Two other short films that stood out to me were The Voice of the Violin, a looks at an Armenian violin-maker in Toronto. It was a wonderful piece, showing step-by-step how he makes the violin and with lovely music to accompany it.   The other short film I liked was Ty Conn: My Brother the Outlaw.   This one focused on an interview with a fellow whose half brother was a bank robber incarcerated in Kingston Penitentary, his relationship with this fellow and the story of his escape from KP in 1999. No spoilers as to how this daring escape ends.

Boneyard.  Horror is not my genre but the writer, director, producers and most of the cast of this movie ar my friends so I hustled back on the train from Toronto to see it.   Although I came away totally confused, I thought the principal actors did a good job of consistently presenting their characters (and Gene, your were bang on as the photographer, too).   There was lots of creepy music and sound effects and suspenseful moments like the feeling i bet you have had when you go down into your basement or up in your attic and the lights are off… and you hear a noise.   I kind of got lost half way through and there was more blood and graphic violence for my liking.  There were a lot of well done technical things about the film but it was just not my bag.

Bitter Harvest also had a lot of blood and violence.  The setting was in the Ukraine in the 1930’s when Russia basically restricted food and caused a major famine, killing millions.  Some of the photography was breathtakingly beautiful, landscapes and horses and forests.  It was also interesting to learn of this horrible genocide and the struggles now in the same part of the world made it particularly pertinent.

Both showings of Live in Kingston at the festival were sold out and I understand why.  I sat beside a young woman who had seen it on Friday night and came back to see it again.  Maybe we were all biased because it is a very Kingston film but I thought it was absolutely  fantastic.  It has a good story, lots of humour, fantastic views of Kingston sites, both inside and out.  The actors, fronted by Anna Sudan, absolutely nailed it.  And there were full song performances with great full sound by several Kingston musician groups and individuals ranging from Sarah Harmer to Forty Seven Teeth and in venues like Musiikki, the Mansion and the roof of the Delta Hotel.   I really enjoyed this film and if you get a chance to see it somewhere, please do. If you don’t live here you will want to move. If you moved away you will want to come back.  I hope they release the sound track.

All Goverments Lie was also a popular and sold out film.  It is a troubling look at both the spin and lies the governments promote and how the various large news agencies are complicit in spreading this “fake news” because, lets face it, it makes money.  As a result of this film I am going to seek out some independent news agencies to read like TYT Network or Democracy Now.

I am wondering why I pay big bucks to go to TIFF each year when I can experience this wide variety of Canadian films right here at home.  If they were selling passes for the 2018 festival I would buy mine now. Kingstonians,  we are lucky to have this festival – embrace it because it will only get bigger and better.

3 thoughts on “And the winner is…”