I did not know Capt. Matthew Dawe. I do not know his family. But the death of this Kingston soldier in Afghanistan in 2007 touched me, just as the recent deaths of Corporal Nathan Cirillo and Warrant Officer Patrice Vincent did last month. The collective outpouring of grief we felt as Canadians reminded me of the debt we have to people who provided support and protection and care to our society. This includes members of the Forces but also firefighters and policemen and nurses and …

Several friends on Facebook are posting a photo of Matthew Dawe, both to remember him and his family but also as a representative of all those other people, alive and dead, we need to remember and acknowledge.

In July 2007, I wrote an article for the Kingston Whig Standard about this event. Here are some updated excerpts.

When I go to an NHL hockey game I’m always astounded and delighted when the whole arena erupts simultaneously with a response to a near-goal or a spectacular play. It feels like all twenty thousand people are experiencing the same emotion or reaction at exactly the same instant and are expressing it as a whole rather than individually. I never get tired of that experience. It momentarily bonds the entire crowd and is what makes seeing the game live so much more exciting than watching it on television, no matter how big the screen.

This past week, I experienced a similar feeling of oneness with a crowd but the link was found in solemn silence and not a cheer.

I’m not in any way a “military” person and I have absolutely no connection with the family of Captain Matthew Dawe or his family; however, I felt an intense draw to attend his funeral service.

I read with interest and concern the reports from Afghanistan and elsewhere of the lives of Canadian soldiers lost in a conflicts that are complex but ones to which our Canadian military presence has been committed. I had not had the opportunity to show my respect and gratitude to any of these fallen individuals or their families. So the death of this young Kingston man with strong local connections drew me to participate in the grief that accompanies such a tragedy.

Several hundred people from all walks of life gathered for the funeral as a brass ensemble played brief muted selections prior to the ceremony and images of an ordinary young man and his family appeared on large screens at the front of the hall. Between the selections, despite the large crowd, there was an absolute and intense silence. Like the cheers at a hockey game, this sober silence, a spontaneous and collective reverence, had a dramatic and unifying effect.

No doubt we were all thinking the same thing. How difficult it must be for the family to experience this loss. How sad it seems that there is such hatred and tension throughout the world. Is it really worth it? Is anything being accomplished or is the whole exercise futile?

How many similar ceremonies have been held for many young Canadian soldiers? Slowly my thoughts moved to a wider perspective to include the deaths of thousands of U.S. soldiers killed in Iraq or, every bit as tragic, to the thousands of military and civilian families who have suffered painful losses as a result of wars around the world, including Kurds and Palestinians and Somalis.

Canada’s role as a stabilization force and facilitator of reconstruction in states like Bosnia, Afghanistan and Iraq is an important one. We have trained and skilled military personnel who, like it or not, we must share with the rest of the world. Repeatedly we hear how young soldiers are anxious to serve in these areas. It is their profession and they are convinced that they can make a contribution. We have to believe them. From a distance we are overwhelmed and perhaps biased by images of slain youth. They, however, can see first hand the positive effect that they are having and that is what motivates them.

The Dawe family gave us a great gift, not only in their contribution to Canada’s military force (Matthew was not the only soldier in the family) but also in allowing us to participate in some small way. Their dignified, yet personal response to this tragedy and their generous invitation to the public to share in this time of mourning allowed us to express the sadness that we feel as a result of losses we know are occurring and also to reflect on the forces that have brought this conflict about and our country’s role and responsibility to attempt to bring about a some resolution.

The spontaneous, respectful, dead silence of that arena said more than loud cheers or protests could. The service of our Canadian Forces personnel touches us all in one way or another. Collectively we pay a price but we must not lose sight of the reason that our troops are caught up in these conflicts or focus only on the losses and not on the gains that happen as a result of their work. 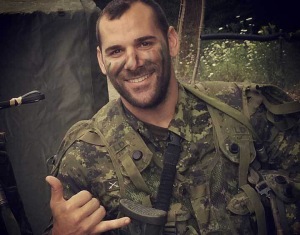