This is Edward. He is the oldest of three kids living with a father who is intermittently ill and absent from the family. For much of the past three years he and his siblings have had to manage on their own.

Christopher and his older brother, Edward at the Hope for Youth School in Uganda.

Edward and his brother, Christopher, are just finishing up their studies at the Hope for Youth School in Uganda – a school that has been supported in several ways by the CanAssist African Relief Trust. Fortunately the staff and administration at the Hope for Youth school have been there to offer an element of stability to the lives of these kids and a bowl of porridge mid-day when food was scarce.

I have visited the school three or four times and have watched Edward and Christopher grow up. They both are involved with the traditional dancing and drumming entertainment that the school.

Christopher serves up some posho for lunch to visitor, Dave Kay, at Hope for Youth School

When I visited the school in September I asked the boys if they planned to go on to Secondary School. Their response was downturned eyes and shrugged shoulders. Their family has no money for them to attend secondary school (it would take about $550 for each boy to provide tuition and books for a year).

Their final exams are happening in December. The teachers at the school imagine that both boys will qualify for secondary school entrance.  (This little school is leading the pack in terms of grades for their district.)

I also met a girl named Prossy who has received top marks at the school but who has no money to continue her education. The teachers report that her academic performance has also been good but she lacks the resources to go on to secondary school.

What will become of these kids, I wonder.

This is a familiar story. African kids may get through elementary school but to go on requires some tuition, books and uniforms and this is often out of reach for a family living in poverty. Even fewer go on to post-secondary education. Most rely on outside support to continue their education. But there are so many pupils in this circumstance all desperate for some assistance.

Enjoy Christopher, Edward and some of their classmates as they do some Ugandan Traditional Dancing at the Hope for Youth School in Uganda. And realize how lucky we are that most of our students are able to complete secondary school with public funding regardless of their background or family situation.

In the last week I have learned three new words. All of them sound like they are close to an obscenity. In some respects they are.

Last month we were bombarded on internet news sites with Miley Cyrus doing a sexually provocative dance that I later learned is called twerking. Not being into Hannah Montana,  I didn’t exactly know who Miley Cyrus was before all this twerk hit the fan. At least I am not admitting to knowing who she was.  In my day the twist was sexually provocative.  And Elvis Presley’s hip gyrations were deemed unsuitable for the Ed Sullivan show so they only screened him from the waist up. 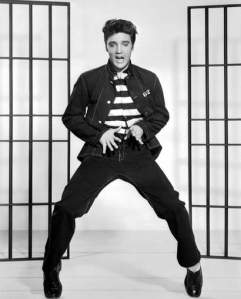 It seems that the dance form is prone to pelvic thrusts and rotations as some sort of warm up to something else.  The twerk is just the latest name for something that has been around for quite a while. And Miley appears only to lack subtlety and talent rather than be doing anything new.

Today in the news it was an anti-fracking protest in New Brunswick that gained attention.  I was caught pondering WTF (what the frack) was all about.  Turns out it is some process whereby pressurized liquid is injected into rock, fracturing it and opening up small veins in the rock along which hydrocarbons and gasses can be extracted.  At least that is what I think it is. 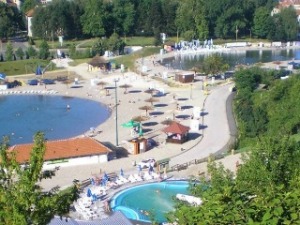 If life hands you lemons, make lemonade. If you get salt…why not a salt lake?

It kind of reminds me of what I learned happened mining salt in Tuzla, Bosnia. This region had a lot of salt under the ground (Tuz, I think, is an arabic word for salt) and they had been extracting it by putting water down underground, dissolving the salt and withdrawing it.  Buildings that  had sunk right into the ground, the dissolved salt forming a kind of crater.   Whoops. The town, ever resourceful, turned the area into a salt lake for swimming and as a tourist attraction.

I don’t think George W is actually phubbing. He is trying to figure it out.

And then there was a CBC show this week on The Current on Phubbing.  I hope I never become a  phubber.  It refers to snubbing someone in a social circumstance by paying more attention to your phone.  You know the people – the ones who take their phones out and put them down on the table beside their plate when you go out for dinner with them.  The people who suddenly are talking to someone else when you are strolling beside them.  The people who interrupt your conversation to read and answer a text from someone obviously more important than you.  I didn’t know that this  ignorant behaviour had a name to it. But now I know. And so do you.

There is even an anti-phubbing website (stopphubbing.com) and Facebook page (Stop.Phubbing) dedicated to pointing out and decreasing this antisocial behaviour. It has downloads for posters for restaurants or table cards you can put  out at a wedding to discourage phubbing. Something that Sage Flowers could offer, perhaps, along with the beautiful bouquets.

If I EVER Phub you, please cut me to shreds over it.  And if you EVER do it to me, you can expect the same.  I will tolerate you Fracking me and even twerking me from time to time but thumbs down on Phubbing. 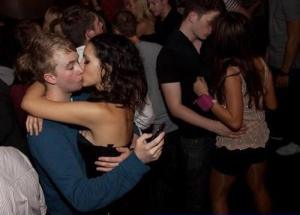 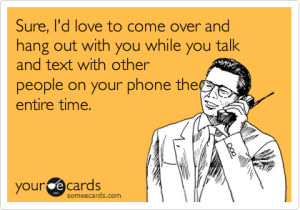 When one goes on a game drive in Africa, there is always the hope to come across lions.  Sometimes they are not that easy to find, particularly during mid day when they tend to lay under the bushes and nap.  I really didn’t expect to see lions on our morning drive in Murchison Park, Uganda but within half an hour we came upon two young female lions right out on the road in front of our vehicle.

We stopped and watched them for a while – always a pleasure. 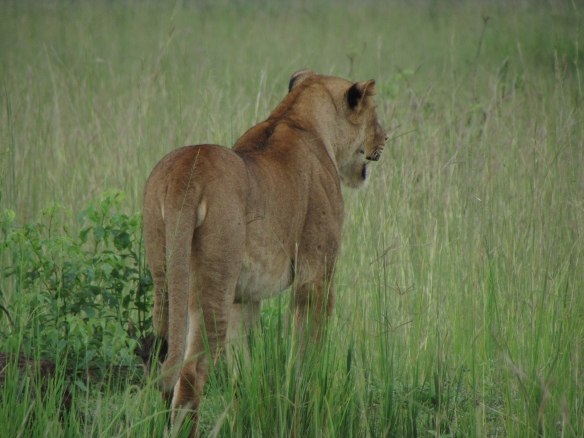 I have just returned from a three-week safari in Uganda.  One of the highlights was a morning spent climbing over bushes in Kibale Forest to watch chimpanzees.  They are boisterous and lively.   They squabbled and shrieked and ran past us in the brush, then ambled up a tree to swing from vines. It was as if we were not there, standing in the forest quietly watching. The Alpha Male kept them all in line. He would settle a fight or chase off a trouble-maker then lie down in the forest, legs crossed, for a rest.

Quite an amazing three hours.

Meet Josephine.  She is over 100 years old and lives in Teso District in Northeastern Uganda.

She  remembers when Africans in her community wore no clothes.  She lived through Idi Amin.  She survived the Lord’s Resistance Army.  She lives alone in a traditional hut, getting some food from neighbours who watch out for her.  Last week I watched her walk into a windy oncoming storm to get home.  She said, the next morning that she just made it.

It was an incredible privilege to have met her last week. 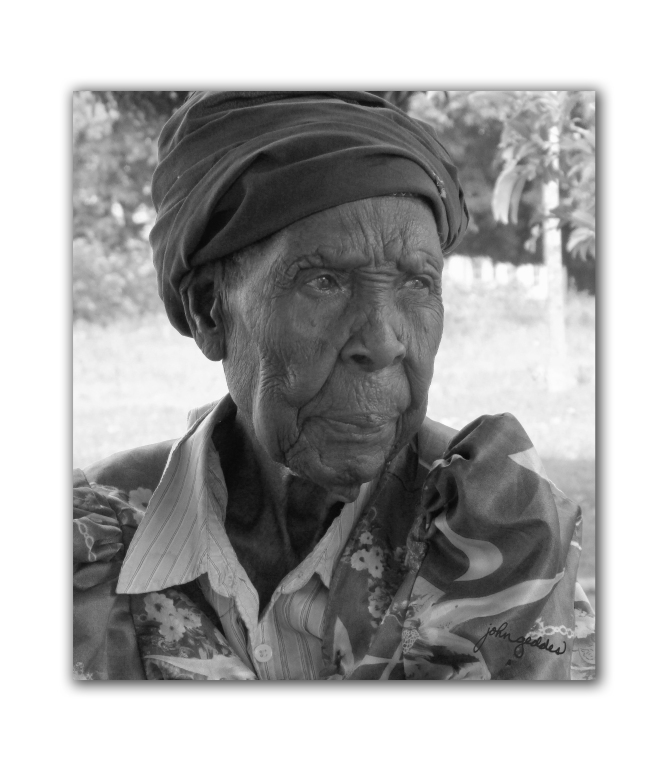 Excitement and adventure to be found at Bujagali Falls …. or not.

If you look at the travel books like Lonely Planet you can find lots of things to do around the city of Jinja, Uganda. One of the highlights is touted to be a visit to the Bujagali Falls, more a series of rapids that are about ten kilometers north of he city on the Nile River. (The Source of the Nile is another tourist must – the place where John Speke discovered where the 4000 mile long Nile River begins as it flows out of Lake Victoria).

Photos of white tourists bouncing through the rapids in large rafts show just how much adventure can be had in the Bujagali Falls rapids.

But…. it seems there is always a but…

The need for electrical supply for East Africa is great and is mostly supplied by several hydroelectric dams. The biggest one is just below the Nile source in the city of Jinja. In the past few years, a second dam has been constructed just below Bujagali. It opened last year. My understanding is that much of the electricity is sold to neighbouring countries although I must admit that on my recent trip to Uganda there were not the long power blackouts that I had experienced there before.

This is “Development” and it will benefit the region, the government who will sell the electricity, and those who can afford electrical supply. It comes, however, with a price.

The Bujagali Falls are now completely submerged under 15 feet of water. The restaurant that once served tourists has been flooded and dismantled. Young men who once acted as spotters or guides are now trying to convince any visitors to take a sedate boat trip on the resulting lake which was calm as a mill-pond. Large rafts sit piled on the shore. Not a ripple is in sight.

Although I have been to Jinja a few times, I had never visited Bujagali Falls. Last week I took a boda boda (motorcycle taxi) to see the falls. There was one other tourist family of four at the site and me. The spot which had been bustling with tourists four years ago was quiet.

This fellow points to a picture of himself in 2009 working with tourists who were white-water rafting on the Bujagali Falls. He is now unemployed with no income source.

I ended up talking to a couple of the fellows who were trying to convince me to take a boat ride. They said that they received nothing to compensate them for their loss of income. Many people have moved away from the area in search of work. Despite being so close to this power source, they have no electricity. I offered to buy them a soda, both to support the fellow who had a kiosk and to thank them for talking with me. The one fellow asked if he could forgo the soda and get some food with the money. He had not eaten for a while. I ended up buying him both food and a soda.

This story or theme is not uncommon. This kind of Development is deemed to be something favourable to the general economy and it may, in fact, help. But the “little guy”, the less than a dollar a day person we hear so much about, does not seem to benefit and often suffers. On the other side of Jinja there is a fish processing plant that receives, cleanse, fillets and freezes Nile Perch caught in Lake Victoria. The plant is owned by internationals and all of the fish are sent to Europe and beyond for consumption. The local people can not afford the fish at the price that the plant can get from the North so they go without. Resources (fish) are depleted from the lake to feed the developed world in exchange for a few low-paying jobs.

The rich get rich and the poor get poorer.

What used to be a waterfalls/rapids is now flooded and calm.