I am excited for the upcoming week. And not because of the Oscars on Monday night. I wasn’t nominated for anything, despite my dramatic background performance in Guillermo del Toro’s upcoming thriller Crimson Peak. My role in that one may be a bit like Where’s Waldo. But I did get paid $141 for getting up at 2am and doing several retakes while tending chickens in the market and hanging out between takes eating a hot dog with Mia Wasikowska.

No, my excitement is for two premieres happening later in the week. The first is an invitation-only first screening of Nightrunners -the Movie in Toronto on Thursday night. This thriller was shot in Kenya in early 2013 and I was lucky enough to be there for most of the shoot, filling a number of roles from looking for locations to putting on bandages and taping iv’s in place on the actors. I even had one scene in the movie with a few lines.

Unfortunately it ended up on the cutting room floor. The director claims that it was not due to my acting but maybe she was being kind. The scene was shot in a real hurry as rain clouds threatened and the light from sunset was quickly dying. The intent was that I carried the leading lady from the lake something like King Lear and Cordelia and then we had a bit of dialogue. Because the rain threatened to damage lights and equipment and the schedule was running tight, we did this scene three times with no rehearsal. Prior to each take the director poured a pail of water over me and we then managed through our lines in the sand on the beach, having never even read them together before. It was fun but we had to pack up quickly to save the equipment ( I was already drenched) and I have never seen the takes. I am wondering if they even filmed anything or if it was just fun dumping water on me as a joke.

A consolation could be that it is one more thing that I share with actor Chris Cooper. Last year with King’s Town Players I had the role of Charlie Aiken in August, Osage County, a part played by Cooper in the movie. I also learned that he had been totally cut from scenes in The Ring. Apparently he had a part early and late in the film but the test audiences wanted more of him and as a result his entire part was cut out. Maybe director Neilson was concerned that the Nighrunners audience would want more of Heinrich.

Nevertheless, the movie will premiere on Thursday night and I will be there to enjoy it. I can hardly wait for it to be shown to the folks in Kenya who had significant roles in it. Will it be worth a 35 hour trip both ways for the 2 hours of sharing this moment with my Kenyan friends? We will see. 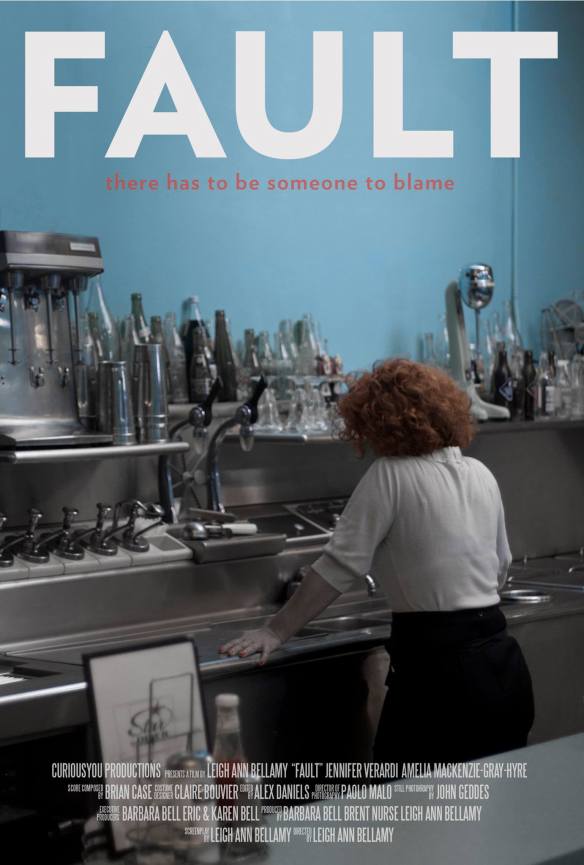 On Saturday night at the Kingston Canadian Film Festival, Leigh Ann Bellamy’s movie, Fault, will be shown for the first time at Memorial Hall. I was present for much of this movie shoot doing the still photography. I saw a rough cut and my right arm appears twice (unless Leigh Ann has cut those scenes, too). At least there were no pails of cold water for this one. It will be a real pleasure to enjoy this evening with my friends in the cast and crew. So proud of them for this production.

It has been great fun to be associated with these movies and watch them take shape. It has given me a totally new perspective when I see a film as I am more aware what goes into each take.

Who knows where these two films will end up being shown. Watch for them. And will you be able to find me in Crimson Peak? I doubt it, but I will know that I am there.

I love airports. It is good thing that I do. I suspect that I have crossed the Atlantic 75 times in the last fifteen years. Not proud of the carbon load I have put into the atmosphere but I will rationalize to say that most of those trips were either to do some teaching in post-war Bosnia or contribute to development in one way or another in East Africa.

This morning at 6 am I find myself in Heathrow in London. This complex is huge. I understand that there are 85,000 people who work here in one capacity or another. And yet the place seems deserted at this hour. I did the walk from one terminal area to another through tunnels and halls and on moving sidewalks that were gleaming clean. I was the only one at the Terminal 2 Security. 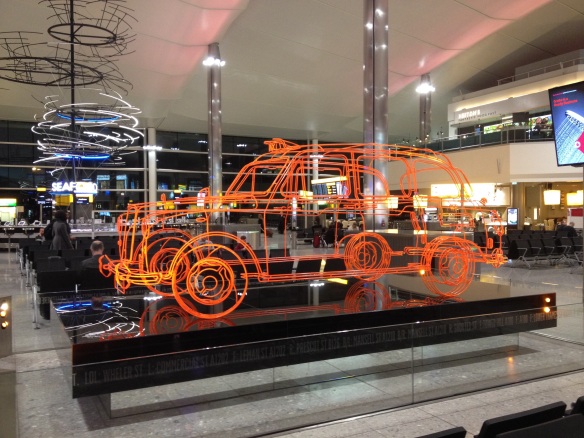 It is a far different world than the one I have been visiting for the past three weeks.

No line up for security check. At 6 am. I was the only one! 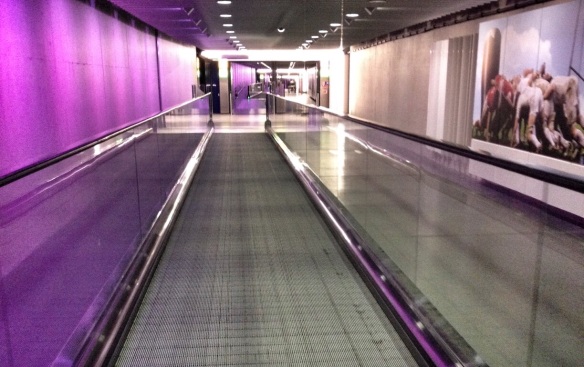 No line up at immigration at 6 am!

I start the 35 hour trip home this evening. Going from 30 degrees C to -10. I may look a little dazed if you see me on the street in Kingston in the next few days – Jet lag, season lag, culture shock. There is always more of an adjustment coming home than when I arrive here.

This is where I have called home for the past three weeks. I have, not once, shut my patio door, day or night. Have had the gentle and sometimes not so gentle slosh of the waves from Lake Victoria to lull me to sleep and the cries of eagles, hammercops and ibises to wake me up in the mornings.

I have had a beer watching the sun set over Mfangano Island before my dinner every evening but one when I was staying at Dan’s family’s homestead away from the lake.

This brings me to good news for my Canadian friends. I have been watching the sun slowly inch northward over the three weeks. The two photos below show its progress northward. Here’s hoping it is bringing some of this warmth to Canada eventually. I just wanted you to know it is on its way! 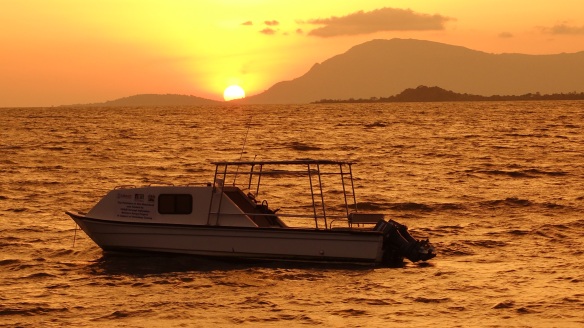 Sunset FEBRUARY 10. It is on its way to you, Canada.

The boats in front of the ICIPE station are always anchored there. In fact, if you look for Mbita Point on Google Maps and get the satellite view, you can see them from space!

While I was writing this post I heard a rustle outside my door and looked up to see this 3 ft long monitor lizard who had come to say goodbye. The first time I saw one of these I thought I was hallucinating.

A safari to Africa usually includes a visit to a game park or two to witness the incredible biodiversity of the wildlife here.

I have done that several time. This visit has been about people. I have been to 21 different schools, clinics and community organizations during the three weeks I have been here.

The only wildlife I have to share are birds and butterflies and cows on the road. The odd monitor lizard scurried away from me but too quickly to get a photo.

There were also a group of Evangelists from the southern U.S. here at a God Loves Kenya festival but I didn’t get photos of them. One of them was trying to get me to go to a parents and children camp somewhere in Northern California. I told him my “children” were all about 40 with families of their own. “How about a couples camp then?” he asked. Just to see what he would say, I asked if they include same-sex couples. You might imagine the look on his face and his response makes a longer story than I can relate here. What fun. 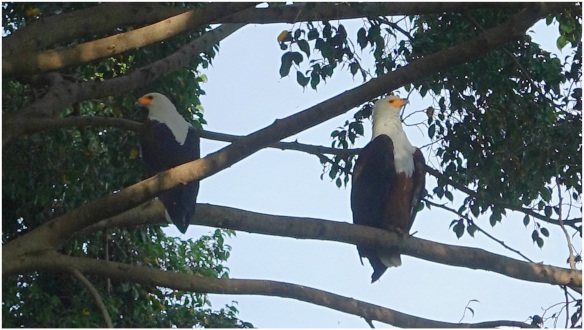 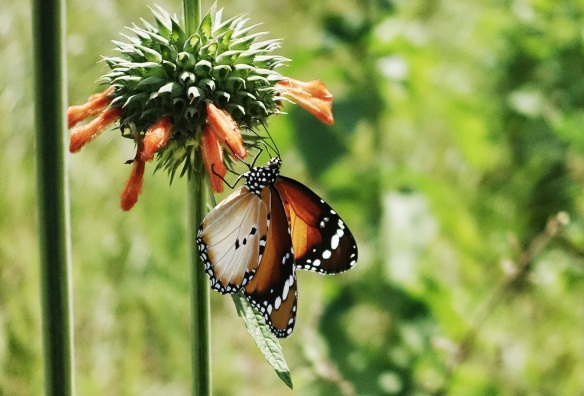 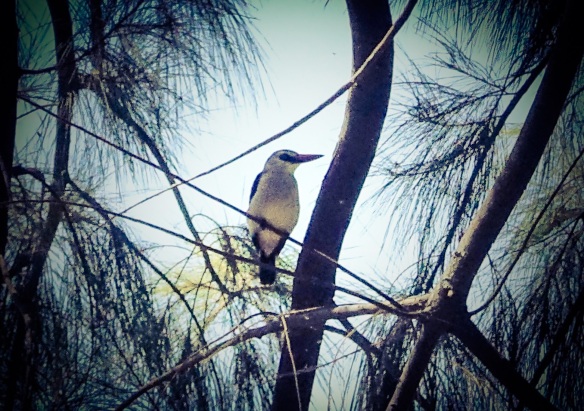 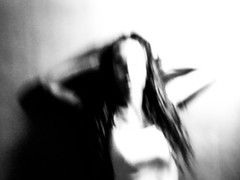 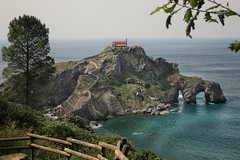 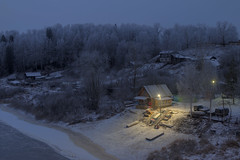