When I walked up to the ticket booth at the movie theatre yesterday, I wasn’t sure if i would opt for Passengers, another futuristic space movie  or Fences, a critically acclaimed drama adapted from a  1987 Pulitzer prize-winning play by August Wilson.  I had my fill of space vehicles with Rogue One and opted to go for Fences.  And I am very glad I did. 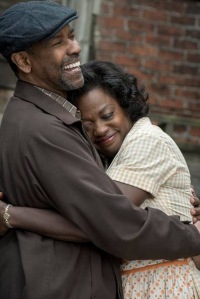 Denzel Washington directs and stars in this film adaptation of the Broadway play that won many awards when it was presented several years ago.  James Earl Jones, the voice of Darth Vader in the early Star Wars films won best actor Tony award for this role in 1987. It turns out that Denzel Washington and several others in the small cast were part of a short Broadway revival of the play in 2010.  It showed.  They knew the characters intimately.  The play is set in the 1950’s in Philadelphia.  Troy Maxson is a 60ish black sanitation worker who is unhappy, unsettled and not satisfied with his life now, or in the past.  He is an African-American Willy Loman.  His wife, played by Viola Davis, is a patient, stoical, supportive pragmatist who is, to a point, willing to overlook her husand’s shortcomings.  Her portrayal of this character, Rose, was sensitive and emotional …no, it was gut-wrenching.  She almost had me sobbing out loud. Bring kleenex.

Each character – the neighbour, the two sons, Rose, the handicapped brother and Troy – have scenes where they get to express themselves intimately. We learn why they are the way they are. There are a lot of words. But they all contribute to the picture and never once feel unnecessary. More than half the movie takes place in a small Philadelphia back yard. It gives the feeling that you are watching a play. Or more that you are just eavesdropping on this family as they struggle. Although we spend a lot of time in this back yard, the camera captures many points of view so it is never boring. And yes, Troy spends time building a fence around his yard and also, it turns out, around himself.

The film is loaded with symbolism – fence-building, baseball, gardens, flowers, Fridays, Gabriel, the Blues, garbage. And there is lots of talk about Death – compared to “a fast-ball on the outside corner”. I will want to see the film again after a bit of a break to take all these references in.

For the last couple of years, the Academy Awards have been criticized for not acknowledging people of color.  This year, with Birth of a Nation,  Loving,  and Fences there will be no lack of accolades for African American film-makers and actors. And if Denzel Washington and Viola Davis are not at the top of the list, I will be shocked.  For my money, Viola Davis gave the female actor performance of film in 2016, hands down.

The movie is emotionally draining and because it is so intense it may feel about fifteen minutes too long – but I don’t know what you could cut.   I highly recommend Fencesas a fine, intense piece of theatre/film.  4.5 out of 5

I have made my annual trek back to Longboat Key Florida for my (non) Christmas vacation. Sunny skies, no snow, barefoot walks in the surf, movies, pretzels, Netflix.

Friends were going to join me this week but cancelled at the last minute because of inclement weather.  My flight out of Kingston was also cancelled the morning I was to travel but not wanting to delay and always able to find a plan B, I took the train to Toronto and stood in a few line ups, eventually arriving about an hour later than scheduled to warm salt water breezes. I have grandkids coming this week so am soaking up the silence and indulging myself in preparation.

I wish my friends and family a satisfying 2017.

One of the indulgences that I enjoy when I come to Forida for the Christmas holidays is taking in a few of the movies that are released year-end.  Since I am here for three weeks this year, I can easily enjoy a few afternoons to take the Longboat Key trolley into Sarasota, see a movie and be back on the beach for an hour long walk to soak up the golden sunset.

Here are a couple that have seen so far.

Why can’t these Star Wars movies be released in some sort of chronological order? They are all starting to look the same to me, maybe because they are all the same, the only additions being the jump in technology in the 40 years since the franchise began. I have to wonder about a movie that I thought the character with the most depth was a droid.

Put on the 3D glasses… A long time ago in a galaxy far, far away….Speeding airships. Crashes. Explosions. Sparks flying. Big music. More sparks. Lasers.  Ping ping,  More explosions. Where are we now?   Who are these people?  Swells of French horns. Eye glances between the protagonists. I thought they didn’t like each other. Father-child reunion.  Violins. Swoopy hats, or are they helmets. Explosions. A city destroyed. Big CGI boulders coming at us.  Dead storm troopers. French horns and violins together. How much more? I have to pee really badly. Dizzying heights. Will she fall? Trite dialogue. Explosions. Big air ships colliding.  Saved? Eye glances. That looks like…Too late it’s over. Full orchestra. Credits. Rush to the toilet. The force be with me.   Ho hum.  3 stars out of five.

Where Rogue One was in my face, this one got into my head.  I knew from the opening ten seconds that this is going to be an edgy film. I saw the name Amy Adams but have to admit that the visuals in this opening sequence were so distracting that I saw not one other title or credit as the opening sequence ran.  The film is a two hour nightmare.  And that is meant as a complement.  Amy Adams plays a bored, unhappy art dealer named Susan with a cheating husband and a superficial unfulfilling career.  She receives a manuscript from her ex ( Jake Gyllenhaal) and as she reads it she is absorbed into that story and reflects both on her past and present situations.  The movie jumps between these three settings, sometimes abruptly but always adeptly.  We are bounced in and out of an increasingly disturbing and violent story and Susan’s life.

All of the performances in this movie were creditable and compelling but I particularly liked Michael Shannon as the crusty, enigmatic Texas lawman.  Tom Burns’ ( A Single Man) direction was what made the movie so disturbingly engrossing.  Tight close ups felt intense. Susan’s world was stark and monochromaticaly elegant but barren.  I cringed as Tony and his family drove down dark roads in the middle of nowhere in Texas, knowing the fear of the dark and and not knowing where you are going or what lurks around the corner or in the next moment. In contrast with the “blow you out of the theatre” orchestrations in Rogue One, there was one suspenseful scene where the music was a barely audible tremulo on violins. You could almost not hear it but it was there, eerily adding to the suspense.  In another segment a dull drum beat softly, mimicking a heartbeat. At other moments, dead silence added to the apprehension.

I came away thinking of how this reminded me of the way I felt reading my friend Iain Reid’s latest book “I’m Thinking of Ending Things.”  When I got into the last half of this book I had to keep going and in my mind I could hear the violin tremulo and visually imagine, like Susan does in the movie, the story tensely unfolding. I think Iain’s book could make this kind of movie.
I liked this movie a lot but know it would not be for everyone. I will give it 4.5 stars out of 5. I am guessing that if you loved Rogue One you would not like this one and vice versa.

Part of the fun of my movie afternoon is waiting for the return trolly at the downtown bus station. What a collection of characters there. One man yelling  angrily at another woman across the benches, a security guard who looks like he is right out of Fargo, and  someone wanting to sell me scalped bus passes. My fifteen minutes there was like turning the afternoon into a double feature.

Twenty two years ago today, December 10, 1994, was the day that my wife, Barb, died after a long struggle with breast cancer.  The weather that year had been mild, much like this year, and we had not yet had snow.

That evening big fluffy snowflakes fell gently and silently as Barb drew her last breaths.  Our family room had been turned into a hospital room full of equipment and medical supplies.  We had a wonderful home care nurse who looked after her physical needs while we sat beside her, waiting for the inevitable. Her death was very peaceful and, in many ways, a relief.  By the time of her death, she had been reduced to a shell of her former self.  Death is a very final marker but we had lost her true essence weeks before.

I remember thinking as she wasted away that I hoped that my remembrances of her would not be those final weeks and months but the 25 years that precede them.  Thank goodness that is the case.  Barb still appears in my dreams from time to time.  Usually she doesn’t say anything, she is just there, maybe sitting beside me in the car or chatting  with someone at a party.  And she is healthy and robust and … just there. She was outgoing and friendly and always had a little glint in her eye.

I can conjure up horrible images of those last few weeks and the many challenges of the eight years of intermittent treatments prior to that but, thankfully, that takes some concentration and I have to work at it. 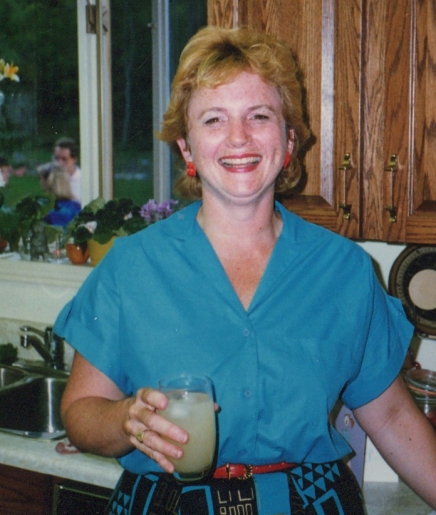 My life, and that of our family, took a turn in a different direction after that day. I have empathy for my kids, having lost their mother when they were teenagers.  I know that they feel the loss, still.  Dad’s are OK but Mom’s provide some nurturing that is special.

It took a while not to think I should be home for dinner but eventually that led to a pretty flexible lifestyle where I could work internationally and be away for scattered and prolonged absences.  I ended up having enriching experiences working and making friends in Bosnia and Herzegovina and then in East Africa.  I now lead a somewhat unconventional life but it has been rewarding and fulfilling in many ways that I would not have imagined or wished for 25 years ago. And Christmas? Well the Christmas season has never been the same.

I know the whole family will stop and reflect and grieve a bit today.  I don’t really believe in life after death but I certainly think one’s spirit can continue both in the minds of others who remember them and in the genes that she passed on to the five grandchildren she never got to meet.

P.S.  December 21.  I was initially surprised by the interest in this post both on Facebook and in my blog.  But then I realized that it is something that everyone relates to.  Every family, every individual, has times of disruption and challenge and even tragedy.  All of us. No exceptions.  The test is whether we can work through the crisis and move on.  Of course it takes time. But living in self pity is not productive. Doors close and others open. That’s life.  The only way to survive and be happy is to accept that reality.  Still, it is always comforting to fondly  remember those who have had positive influence on our lives but are no longer here. 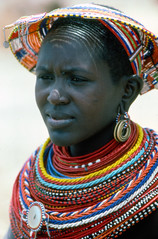 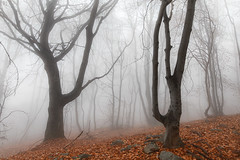