I came across a couple of photos buried deep in my computer’s hard drive this week that were taken in 1953. I was six that year.

I remember the circumstances of one of them. We lived in at 448 Mornington Ave in London, Ontario and this was a Halloween party for me and my friends in the neighborhood. It looks like we were all dressed as hobos. Hobo costumes may seem to be a bit unimaginative but they  were not expensive to create.

A television was a new item in Canadian homes. The first CBC television stations opened just the year before, in 1952. The local station had only 4 hours of programming per day and the rest of the time it was a black and white test pattern.

I am not sure if I had ever been to a movie. Play was in a sandbox in the back yard. My imagination would have been stimulated by picture books like Winnie the Pooh, Peter Pan and my favourite of all – Nursery Tales That Children Love.   I still have that book. I smells a bit musty but I treasure it as something from my childhood.  Inside the front cover is an inscription – “TO JOHN, FROM GRAMP.”  And I did love those stories. The Gingerbread Boy, Peter Rabbit, The Three Little Pigs.

My favourite was Little Black Sambo – probably now banned as being politically incorrect.  But maybe it set me dreaming of Africa even then.

My mom (anyone who knew her will be able to image this)  had decided that to liven up the Halloween party we would all go down into the basement in the dark and she would pass around little bowls of stuff that were supposed to represent body parts. Cold spaghetti was brains. Peeled grapes were suppose to be eyeballs. My Mom was not as creepy as this now sounds. In addition she had decide to make the basement dark and spooky by tying a piece of colored cloth around the bare light bulb that lit the basement stairs. Mid way through the ghost story, the cloth caught fire. We abandoned the bowls of body parts and scrambled upstairs and outside to safety. I don’t think Mom tried that trick again.

This photo of the newly crowned Queen Elizabeth II hung in every school classroom.

Earlier in 1953 Queen Elizabeth was crowned, her father, King George having died the previous year. I remember playing in the back yard on that June day and admiring the wooden nickel that we had been given at school to commemorate the occasion. I layed on the grass watching the clouds whiz by and knowing that something historical was happening that day but having no real sense of what if was.

I was the same age as Prince Charles.  I used to think that maybe some day we could be friends.  I did shake hands with him and chat ever so briefly when he and Diana visited Kingston in 1991.  That was as chummy as we got. Charles probably doesn’t remember the moment as vividly as I do.  His hand was not soft and princely but rough and more like that of a gardener. Mine was probably sweaty like so many others he had encountered.

The first stage of the Stratford Festival in 1953

The Stratford festival opened in 1953. My grandparents had friends in Stratford named Helen and Bob, who were somehow involved with the festival and  they attended early performances that were done in a big tent. They went to parties with the likes of Tyrone Guthrie and Alec Guinness who starred in the first production of Richard III.

Although I was only six, I walked to school myself. It was about eight blocks away and over a level railway crossing for the main CP line. Today parents line up in the schoolyard to scoop up their kids as they emerge from school. Innocence (or at least the feeling of innocence) lost and replaced now by paranoia and suspicion. 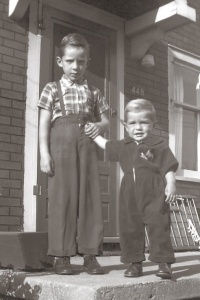 My cat was named Tippy. My brother was/is named Bob. Both were about 18 months old. My grandparents were ten years younger than I am now and I thought of them as old.  I now have five grandchildren of my own.

I  was probably having fun at that Halloween party and have had a lot more fun over the past 60 years.

Time flies when you’re having fun.