Primum non nocere – first of all, do no harm”  was a dictum that I learned in medical school and always tried to apply in day to day practice.  I remind myself of this principle, as well, in my role as a trustee of  the CanAssist African Relief Trust, an African charity that has consumed much of my energy over the last few years.

There are two schools of thought about providing development aid to some struggling parts of the world.

Peter Singer puts forth the argument that we are morally obliged to help. If we see someone straining to survive and helping them would be of little significant consequence to our own well-being then we must.  Most of us would not hesitate to wade into a shallow pool to save a drowning child, even if it meant getting our new leather shoes wet and dirty.  Taken more broadly, giving up the cost of a night out at the movies to help vulnerable children in Africa follows the same moral responsibility.  A life saved is a life saved, whether in a Canadian water park or a Ugandan village.

Other writers wonder whether some forms of developmental aid are doing more harm than good.  A recent  documentary, Poverty Inc, refers specifically to the tons of rice that poured into Haiti after their disaster in 2010. This aid was certainly helpful for crisis relief but it continued to flow into Haiti after the crisis was over.  Free rice, bought from suppliers in the US and subsidized by the US government to provide “aid”, caused the farmers in Haiti who previously sold rice locally to go bankrupt.  Who would pay for rice at the market when you can get it for free?  This ongoing supply undermined the local economy and increased dependency while American suppliers were being paid.  There is a difference between humanitarian aid and ongoing developmental funding.

This debate challenges me to think about what we do through the CanAssist African Relief Trust.  How can we satisfy our moral obligation to help struggling communities but not create or foster dependency?  Like the primum non nocere dictum, it is partly what we don’t do that is important.

First of all, CanAssist does not send goods; we send money.  We don’t flood the East African market with materials purchased in Canada and shipped overseas at great cost.

CanAssist does not deal with large multi-layered governmental departments but directly with individual schools, support groups and clinics. We don’t go to a community to promote our own agenda or ways of doing things.  We let the community, school, health facility come to us with their ideas of what sustainable infrastructure we can fund that will improve their well-being.

We don’t send unskilled volunteers to Africa in a “voluntourism”  holiday to build a school or do  other work that can be done more effectively by Africans. Our supporters don’t rob jobs from local carpenters and masons who need that work to pay for their family’s schooling or health needs. Instead, our funding stimulates the local economy, albeit in a small way.

We don’t provide money for programming, staffing or other individual support. Once a donor starts paying for school fees for a young child, for example,  the student  becomes dependent on the benefactor’s help to finish secondary school, and beyond.  It becomes difficult to stop this individual aid.  And only one person benefits from this well-meaning generosity.  CanAssist provides communities with funding for sanitation or clean water, or for classrooms and furnishings at rural schools.  The materials are purchased locally and construction done by employing local workers, both men and women.  If parents are healthy, better educated and have work available, they can earn the money to look after their children.  CanAssist project funding, therefore,  provides two benefits – temporary employment for local people and infrastructure improvement to the community, benefitting many rather than just one or two.

CanAssist’s administrative expenses in Canada are about 5% of our budget. For some other development programmes, a large proportion of the claimed development funding stays in Canada, paying for salaries, airfares, office space, fax machines, hotels and computers. CanAssist does have obligatory administrative expenses like bank fees, Internet  access, postage and liability insurance and some unavoidable professional fees we can not get pro bono. All other goods and services are purchased in Africa.  We pay no Canadian salaries.   We provide casual employment to some Africans to help implement our projects but this, too, provides initiative to them to work to earn their money. It is not a handout.

We don’t fund  one group indefinitely.  CanAssist attempts to give a school or community a kick-start to help their development but ultimately they must figure out how to manage their own operational and infrastructure needs.  The goal is self-sufficiency and this would not be attainable if the group could rely on CanAssist support indefinitely.

For these reasons, I am convinced that that CanAssist can continue to provide help without harm African communities.  We are grateful to our many generous donors who participate confidently in this mission with us – knowing that they can help without fostering dependency.

Infrastructure.  In the last few weeks Canadians, during a long election campaign, have heard their now newly-elected Prime Minister, Justin Trudeau, and the Liberal party talking about it. In fact, reporters couldn’t ask Trudeau any question without ending up at his talking point which is ““Every dollar we spend on public infrastructure grows our economy, creates jobs, and strengthens our cities and towns.”

“What time is it, Justin?”  “I’m glad you asked that question, Peter. We think it is time to run a deficit to invest in infrastructure because every dollar we spend … ”

We got the point. I happen to agree with it. And it appears that a majority of Canadians did too. Trudeau’s Liberals were elected with a majority government.

Since its inception In 2008, the CanAssist African Relief Trust has been investing in infrastructure in East Africa for exactly that reason.  We have built school classrooms, bought hospital equipment, constructed toilets, provided clean water catchment and bought school desks and books. 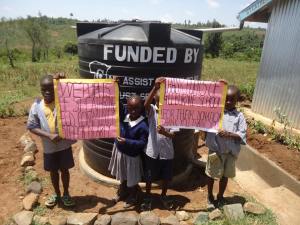 We know, because we visit the communities we help, that this is making a difference to the men, women and children who live there.  Better educated girls are more likely to become self reliant, have better opportunities for employment and be more informed as mothers. Children who learn about the benefits of sanitation, clean water and sexual responsibility will be able to apply that learning to manage themselves, their families and lead in the community.  People who can read and access the Internet will make more informed decisions about their governments.  In short, improving the infrastructure relating to education, health and sanitation will allow the “human capital” any community to flourish.

Another benefit that is not quite so obvious is that by providing funding for these projects, CanAssist donors also have the opportunity to give work to many folks who otherwise are unemployed.  We don’t send goods made in Canada or old books or microscopes.  We send money.  Our African associates tell us what they need and we respond with funding.  Almost all of our money is spent in Africa, our unavoidable Canadian administrative expenses being in the range of five per cent.

When we build a classroom or a latrine in Africa, the project purchases the materials locally and employs local labor. Amuge Akol is one of our associates in Olimai, Uganda where we are currently constructing two latrines at a clinic where previously the toilets were falling apart and full,  (can you imagine no clean toilets at a clinic?) She recently reported that, in addition to improving the sanitation for staff and patients, the project has given several people work. “The project has provided 3 months employment to 12 people who otherwise would probably not send their kids to school this term or have no income for their families.”  The total cost to accomplish this, to CanAssist donors, by the way has been a meagre $6000.

Some of the desks being locally made for the Hope School in Mbita, Kenya.

In another Kenyan community CanAssist is in the process of having desks constructed for a local school. In 2013, we completed classrooms at the Hope School but the building has been without furnishings.  CanAssist, is having 200 chairs and 100 metal-framed desks locally built to furnish the empty Hope School classrooms as well as others at the school.  This project will provide durable furnishings for the school but it is also employing three workmen over several months and acquire materials locally.  The community benefits twofold – employment and infrastructure.

This is what the Liberals are proposing to boost our Canadian economy…only the money for this will come by running a deficit rather than from well-wishers from Uganda.

“Why should individual Canadians support projects like this in Africa through organizations like CanAssist?” you ask. “Doesn’t our government give money for development in poor nations?”

The short answer to that is “Not enough.” 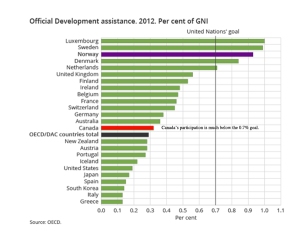 In 1969, Canada’s own Lester Pearson headed a commission at the UN that determined and recommended that poverty could be significantly reduced or eliminated in the developing world if the rest of us applied 0.7 percent of our Gross National Income (GNI) to Official Developmental Assistance (ODA). Many countries have achieved that goal.  What has Canada  done?  Despite repeatedly committing to reach this goal, the highest Canada ever reached was about 0.5 per cent in 1986. Over the last few years, as other countries increased their assistance to record highs, Canada’s contribution to ODA has actually dropped below .028 per cent of the GNI.  Not the kind of record internationally to be proud of.

And do you know how the Harper government was able to present, in an election year, a balanced budget? In part, it was by reducing or freezing spending on ODA, and actually not spending over 125 million dollars that were already approved for development work.  It is easier to balance your budget if you simply just don’t honour your commitments to poor countries.

Your gift to CanAssist can help provide tangible resources to East African communities and, at the same time, stimulate the local economy by providing employment.  We welcome your support of the work we do though tax-deductible donations by mail or online.