I’ve spent the past couple of weekends sitting on a commode chair – the lid closed – visiting my father who is in University Hospital in London Ontario. Dad is 94 years old. His body is wearing out. He is been very lucky to be extremely active and independent up until the last few weeks. At the end of July he went with me and my daughter and granddaughter – four generations – to see Crazy For You at the Stratford Festival and three weekends ago, he spend a couple of days at my brothers cottage in Kincardine. He just reluctantly gave up his internet account last month, disappointed that he would have to miss out on Facebook messages. We have told him we would read them to him when we visit.

But his old body seems to be edging toward its expiry date.

For the shifts of the new caregivers that have never known him but now look after him, he is a frail, blind, teetery, somewhat muddled old man. I brought an old photograph to his room and put it over his bed so they could remember that he, indeed, was once young like them.

The picture is one of my favourites. It was taken by a London Free Press photographer in late December 1945. It shows my dad returning to Canada after being in Europe during World War II and being greeted by my mom at the train station. They had not seen each other for 2 1/2 years. By mid 1946, they were married and remained together until my mom passed away over 60 years later.

The old man in the bed seems to be a different person. But I know that underneath his frail, deteriorating body, the essence of that  young soldier still exists.

It is difficult to watch someone who has been so independent and “in control” of his life become totally dependent. A few weeks ago, dad said to me “it’s not being dead that bothers me, it’s the dying part”. In addition to being sad that dad is suffering one indignity and loss after another in an accelerating  cascade, I  also reflect that living to a “ripe old age” is a two-edged sword.

Dad was initially admitted to the cardiac ward of the hospital and, as such, receives a “cardiac” diet. He keeps asking me where dessert is. “Is there any cake to go with that?” he asks as I spoon in the canned fruit cocktail. So I smuggle in donuts from the Tim Hortons shop in the lobby. 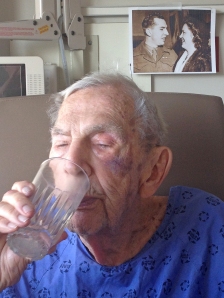 Whether it is a pre dinner gin and tonic or life itself, Dad is working on savouring it to the last drop.

Last Friday he insisted that in a cupboard somewhere in the room there was a bottle of Beefeater gin that he had purchased last week.  He really wanted a gin and tonic before dinner.  On Saturday I went to the liquor store, bought a  little bottle of gin and a couple of tins of tonic, smuggled two  glasses from the hotel that I’m staying at into his room, got the nurse to bring us a bit of ice and we had a gin and tonic before dinner.  He sat back and enjoyed it and ate a good supper – complete with ice cream and a cookie.

And why not? He’s earned it.