Sails up today.  Some very pretty places on the riverside.  We passed close by a town called Three Rivers, its name drawn from the three rivers that join into one and empty into the St Lawrence close to it.

We have been sailing through St Peters Lake this forenoon.  At the head of this lake we came to a curious place, actually sailing among plantations…thickets of weed, the water running through the thickets which gave it a wild looking appearance.  About 9 o’clock we came in sight of our destination haven, Montreal.*  The lights of the town were to be seen. It was too late to anchor in the harbour.   This is my fifth Sabbath now on the “Home”.  I have been indeed highly favoured as I can say I have been amongst the healthiest and the ship all our voyage. And now that we are near prospect of being landed in a strange country, may our ever Kind Father in Heaven be with and guide us all times by his Counsel and afterwards receive us into glory there to meet to part no more forever.

We took up anchor between 6 and 7  and were immediately towed into the harbour.  It was this morning five weeks ago that I left Marnoch for America.  This morning at 10 I went ashore act montreal and set my feet for the first time on the often heard of and famed land of America.  I went through the town with a letter I had to a Mr Kingston, St Paul’s Street. , the gentleman who had charge of me.  I was

nearly struck with the horses running about, they were so nimble , little creatures, their cards or what they have for them consist of 2 wheels and an axle with two long sticks, something like a ladder laid on the centre of the axle with stuck out behind for a piece and 2 spring shafts.  They appear always to be running at a trot, sometimes at a gallop.

This afternoon mot of the passengers got their luggage off the ship to go on board a steamer to sail early in the morning.  We were all sorry to part with each other as we have been very agreeable and neighbourly all along the voyage. It is not likely we will all meet again in this world. Oh, t
hat we may all be fitted for spending never ending eternity with each other there to part no more forever.

Went aboard the steamer “Fashion” ** which sailed at 1 o’clock for Port St Lewis.  We met a good number of rafts in the canals and stopped at a number of ports to stop at and get off and take on luggage etc.  I got a fine view of Montreal.  I saw two parks thickly set with apple trees all in rows, near the town.

Arrived at Port Lewis 5 am, this morning, got my trunk o the wagon which runs daily to Huntingdon.  Our road was none of the finest, a great part of it being laid with planks of wood as the ground appeared vert be very soft in some places.  The wagon went past Mr Reid’s and I was, owing to this lucky chance, landed at the very house about 10 o’clock in the forenoon, tired enough of the first drive I got in an American stage wagon.

Thus I am landed safely here, 5 weeks and 2 days from the time I left my own dear home.  There is a great cause for thankfulness on my part for the great blessing of good health all along this voyage.  I can likewise commend Captain Poole being very careful of us all along, and of missing no opportunity of forcing on the way as fast as he could.  The men were kind to us in their own way but mind at times with oaths and bad language, a habit to be regretted and so prevalent especially among these sailers who are exposed to dangers night and day and not knowing how soon they may be ushered into an eternal world where “he that is filthy, let him be filthy still.”

And now, may that god who is the same yesterday, today and forever be with me at all times and guide me with his counsel in a foreign land. May he enable me to discharge the duties now before me with all faithfulness, keep me from every evil, may and at last to bring me into His Own Kingdom in glory, there so spend with him a never ending Eternity.

*Montreal had a population of about 60,000 in the early 1850’s and was a busy port, receiving many immigrants to Canada from Ireland and Scotland. 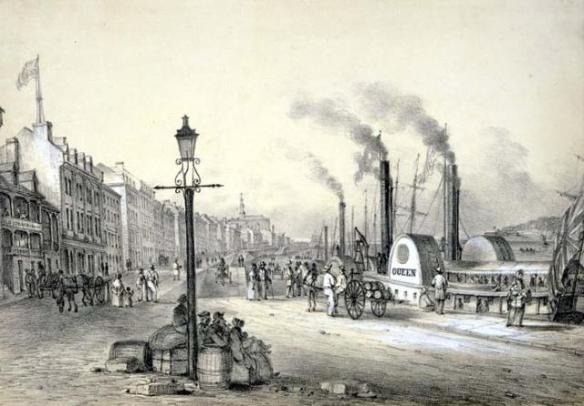 **The Fashion, was a sidewheel steamer like the one below,  built in 1847 in Michigan – 160 ft long and 25 ft wide. It suffered a number of accidents and repairs and in November 1856 was drawn ashore and abandoned in Bayfield, Ontario.

A letter to Peter Porterfield from Huntley, Scotland – sent in 1862.  You may remember that Peter set out from Marnoch, Scotland and when he arrived in Huron County, Ontario he named the hamlet where he lived Marnoch.

This is a portrait of an older Peter Portefield and his wife Mary Stevenson, my great grandparents.  They were married on January 25, 1863 in Belgrave, Ontario and Peter died on December 5, 1907 at the age of 73. He is buried in Brandon Cemetery, Belgrave, Ontario.

And finally, this old clock sits in my living room still keeping good time. It was purchased in 1880 by Peter Porterfield and had a 2 year warranty. 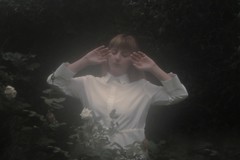 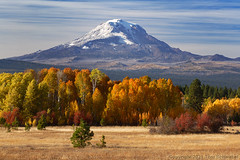