The photos were all taken with my iPhone 11 Pro and edited and compiled on the iPhone and iPad using QuikStories and Kinemaster.

After waving good day to the grandkids as they headed off to school, I walked  to the nearby conservation area in Whitby, just east of Toronto and spent an hour with nature. Just me and the birds and bunnies and butterflies  and wildflowers.  I felt like Snow White.  I saw no humanoids for at least an hour but did encounter some wild turkeys, two deer, lots of curious chipmunks and a big turtle.  I had my 12,000 steps in by 10 am.

By 12:30 I was in the heart of Toronto. Incredible, really, to go from solitude to the vibrant centre of Canada’s biggest City in what seemed like a heartbeat.

I will be working in Toronto all week.  I always find the core of the city invigorating.

I lucked out when I checked into my hotel to find that I was upgraded to a “club room” with lounge access and a full breakfast.  I headed over to Church Street for a long overdue haircut, figuring that the Gay Village are might be my best bet to get a good haircut from a new barber.  I was right!

And tonight I met a colleague,  Gail Gray,  for dinner.  Gail and I worked in tandem in Bosnia for 10 years.  My friends in BiH will be delighted to know that we get together annually and reminisce.

Here is a Toronto selfie I took today. Can you find me?

If a picture is worth 1000 words, here are several thousand words in photos to highlight the spectacular autumn colours in Ontario this year. 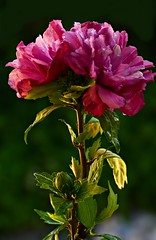