Kingston Ontario’s history includes a cholera epidemic that, between 1932 and 1934, killed ten percent of the city’s population.

Kingston residents are all familiar with the downtown McBurney Park ( known locally as Skeleton Park}, now home to an annual summer arts festival,  where many of the victims of this epidemic were buried 180 years ago.  Kingston’s popular home-town band, The Tragically Hip, even have a song that references the outbreak. The Hip Museum website has a great summary of the cholera epidemic that basically closed down all the stores in town with the exception of lumber outlets to make coffins. 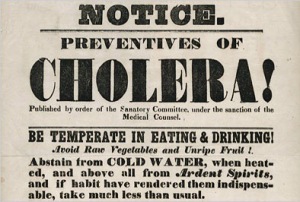 Cholera was then, and remains now, a serious consequence of inadequate sanitation and clean water. It was not until John Snow traced an outbreak in London to a water pump on Broad Street that we understood that the disease was spread through water exposed to fecal contamination from other infected people.

Just last week I received an email from Dr. Karen Yeates, a Kingston nephrologist who is currently with her family in Tanzania. She writes:
“I just managed a cholera epidemic over Christmas at the little hospital I am doing some part time consulting at. I never thought I would see it in my lifetime as a physician…..its incredible that we have the ability to do everything we can in this world with technology and medicine but, the poor and disadvantaged in sub-Saharan Africa struggle with diseases of more than a century ago. We have had over 30 cases but no deaths thankfully. We traced it to lack of toilets and clean water in the three communities where it came from. They had stopped boiling water due to lack of ability to afford wood for their fires…its a choice of make food or boiling water but not enough wood for both. Inflation is high here right now due to the strong US dollar and everything has become more expensive for families here.
I was thinking about CAN-ASSIST and how many toilets you have built over the years….we can’t forget about these simple things…..:).

Keep doing what you all do so well. “

The CanAssist African Relief Trust continues to work to improve water and sanitation for schools and communities in East Africa. This week we are starting a latrine project at a school on Ukerewe Island in Lake Victoria. In 2015 we installed clean water supply and toilets in ten different schools, clinics or lakeside villages.

There is little specific treatment for Cholera other than aggressive fluid and electrolyte replacement. Prevention through sanitation, protection of water supplies and hand-washing remains the key. This YouTube video is in Swahili and aimed at instructing African people about the importance of these prevention measures. It is simply presented and without knowing a word of the language it is easy to understand the message.

For several years I worked in Bosnia and spent a lot of early Decembers in Sarajevo, a multicultural city that was still predominantly Muslim, before returning home for Christmas.  The country was also in a post-war period and struggling to rebuild.  I was always struck by the contrast between their society as it prepared for the winter solstice and year-end and mark varied religious celebrations and the onslaught I got when I came home the week before Christmas where I was bombarded with the pre-Christmas hype and commercialism that we endure in North America.

In the past few years, retailers have developed special shopping days to encourage people to buy, buy, buy – Black Friday and Cyber Monday.  The aim seems to be to offer bargains for people buying Christmas gifts and help the retailer get everyone in the spending mode.

This year, for the first time, Canada will mark Giving Tuesday.  Instead of focusing on getting, on December 3 there will be a country-wide effort to think about giving back – either through donations or volunteering. 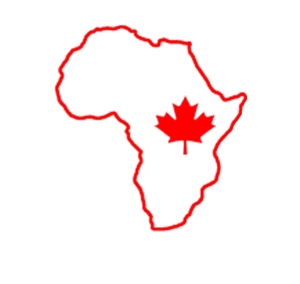 The CanAssist African Relief Trust depends on donations from people across Canada to do the infrastructure support work in East Africa that we know helps communities to improve their well-being.  We fund school classrooms and desks, hospital equipment and beds, rainwater catchment equipment in schools, clinics and communities, latrines for vulnerable children and adults at schools and in villages where no facilities have existed.

Each year CanAssist attempts to fund about $100,000 work.  We rely on the generosity of donors to do this.

This Giving Tuesday we hope you will consider the CanAssist African Relief Trust in your charitable activities. And a bonus is that a donor has agreed to match the first $3000 in donations to CanAssist on December 3.  So the value your donations (which already can buy about 4 times as much in East Africa as it would in Canada) will be doubled. Your donation will also be tax-deductible.

A study in the U.S. last year showed that the majority of people would prefer to have money donated to a charity than receive a gift that they could not use or did not really want. In this Holiday Season, please put CanAssist on your Giving list.  Donations can be made with a credit card on the Canada Helps link below or by searching for CanAssist on the Giving Tuesday website.  Or you can mail a check to 582 Sycamore Street, Kingston, Canada K7M7L8.

In the next few days, I will post some videos that highlight some of the work that CanAssist has already done in Kenya, Uganda and Tanzania.  We plan to continue to do similar work next year with your support.

Listen to members of various CanAssist partner communities as they express their appreciation for the generosity of Canadians that is making a difference for them and their families. 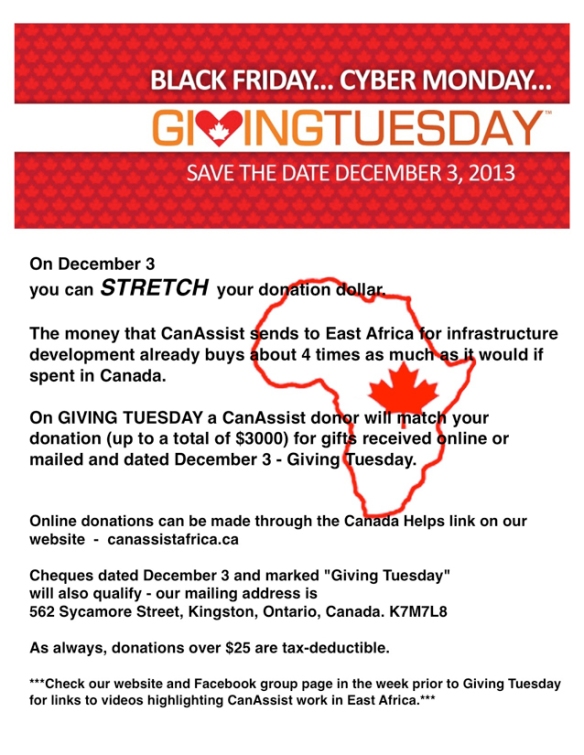 I never met Susan Wells. The news that this 41 year old Canadian aid worker had been killed in late November shortly after arriving in Tanzania to do charitable work struck home, however.

I imagined her arriving at the Kilimanjaro airport, tired from the long flight from Canada but invigourated and very excited to be back where she felt she belonged in some way. She would have been eager once more to meet loving children who would swarm her and welcome her in a heartwarming way that is hard to describe.

But she never made it. Her body was found in a field near Arusha. What exactly happened is still not certain but the bottom line is that her mission to East Africa ended in tragedy.

The message conveyed to others by this horrendous assault might be that East Africans are cruel and heartless. It is actually quite the opposite. I’m sure that the people living in the community where Susan Wells worked are grieving with a deep despair. I know that she would have had loving associations with many. Why else would she continue to return?

There are bad people everywhere. We don’t want all Canadians judged by the likes of Luka Magnotta, Russell Williams or Paul Bernardo. All of America can not be measured by the actions of the young man who murdered children at a Connecticut school this week. Tanzania has the same population as all of Canada. A tourism sector report in 2010 reported close to 1,000,000 tourist visits per year. Foreign visits  – both by tourists and by community aid workers – are  an important contributor to the local economy. Violence of this nature towards foreigners is rare.

Travel anywhere has its risks. Visitors to East Africa are aware that crime rates there are much higher than at home. Foreigners are perceived (and rightly so) as having more money than the locals. It must be tempting if you see a visitor using an iPhone that costs as much as you live on for a year, to want to relieve them of it. Pickpocketing and theft is rampant. Even the locals are cognizant of security risks and the potential for them to be victims of crime. Caution is always required. I’m sure that Susan Wells knew that and in all likelihood she thought she was being safe. Most of the people you meet are friendly and helpful. It is hard to imagine that you may be the victim of of such a violent crime – whether at home or abroad.

It is very sad that a young woman who had dedicated herself to sharing with people less fortunate in Africa has been brutally murdered. I suspect, however, that she would not want this crime to taint the reputation of the East Africans who had provided many other loving moments that she must have experienced while living and working there.

Visitors to East Africa are much more likely to be greeted with welcoming affection than negativity.