As a result of my last blog entry, friends have responded with information about a local organization that is working to help Syrian refugees come to Canada – Kingston area in particular.

The group recommended by two of my friends is the Four Rivers Presbytery at Seeley’s Bay.

A small group of us here in Kingston are mobilizing.  We are partnering with a local organization that has brought one family to Kingston in July, and are in the process of getting ready to receive another family at the end of September.  They are currently in a bunker in Lebanon.  Learn more about who they are and their story here.

This incredible work has been done by Dawn Clarke, a Minster at the Perth Road United Church, and a team from the Four Rivers Presbytery in Seeley’s Bay, and the Kingston Islamic Society.  They still need $25,000 to make this happen – to sustain the financial one-year commitment to the current family, and have the funds for the second family.  The hard work of receiving approval from Citizenship and Immigration Canada is already done, but missing link is the financial resources.

Here’s where you can donate.  This money goes directly to getting this family to Kingston and supporting the family that just arrived.  If you are more comfortable writing a cheque, information can be found here in the left hand column.

John, I can assure you that aside from the cost of printing some pamphlets and setting up a website, this group is putting every single dollar raised toward sponsoring and settling these families.
An overpaid CEO, you ask? In fact, Save A Family From Syria is a 100% volunteer group.
As far as having “a concrete plan in place to actually bring a refugee family or families to Canada”, you’ll be pleased to know that one family is here, with children starting school next week, and another family (with 4 children) will be arriving in the last week of September.
It is the intention of this group to continue to sponsor more families in the future.

I have reviewed all this and made a donation to this group.  I will await other responses to see if there are more local groups doing something similar.  I encourage you to look into this one, however, and open your hearts and your wallet to help them achieve their goals. It’s the Canadian way, is it not?

Once again – Here’s a quick link where you can donate right now using a credit card to a local group actively sponsoring Syrian refugee families to come to Kingston area. Tax receipts are issued for donations to this cause.

As the crisis in Syria enters its fourth year, the Aljalim family needs your help.

While cleaning out a closet I found a treasure. Old movies of my family that my Dad must have had transcribed from the little 8mm 3 minute films that were popular in the late ’60’s. The movies are grainy and dark but what a treat it is to see and remember Christmases from 55 years ago.

My Vardon grandparents in this film are younger than I am now.  My Dad in 1959 was younger than my eldest daughter is today.  I have a granddaughter as old as I was then.

My brother and I were lucky to have both sets of grandparents living fairly close by so we would all get together at one home or another for Christmas, taking turns as to who cooked the turkey. How wonderful it is to hear my mother’s laughter and to see my grandparents images again. All of us having fun.

There was always music.  One grandmother played the piano, the other the accordion. My Dad and Grandfather played the fiddle. We had a bass drum, flutes and when he got a bit older my brother played the trumpet. I could play the ukulele and the piano (not at the same time). My mother sang and danced. And laughed. 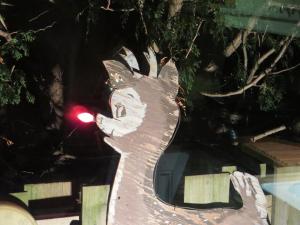 Rudolph as brightened a family yard now for almost 60 years!

My Dad had made a plywood Rudolph with a red lightbulb nose that always was strapped to the railing of the front porch.  My brother Bob still has that Rudolph and posted a picture last week of it in his Hamilton yard.

In 1960 my mom’s cousin and her family came from Montreal to spend Christmas with us.  Always fun to get together with “cousins”.

In 1960, John F Kennedy was elected President of the U.S., John Diefenbaker was Prime Minister of Canada, Spartacus and Psycho were on at the movies and Elvis Presley and Chubby Checker (The Twist) were at the top of the music charts. A new group formed that year but not yet known to the world was The Beatles.

For the past 9 years, I have made a point of visiting the Moiko family who live just outside Nairobi on wonderful piece of land that has a panoramic view of the Ngong Hills.

I have watched their family grow up and grow in size. Last January when I was at their home, Liz was pregnant and hoping that the baby would come along any day. Little (actually not so little) Charles was born in mid-February and so this past weekend was the first time that we were able to meet. He is a robust, happy, curious child that is well loved and cared for by the extended family that lives at the Moiko compound.

Sandra. a toddler when I first met her, is now a tall 10 year old in Class 6. She goes off to school, six days a week, taking the school bus at 6 am and not getting home until 7 pm. And then there is homework to do. African students spend many more hours acquiring their education than Canadian children do. Education is seen as an important responsibility and opportunity to get ahead.

Another tradition is to hike through the hills to a cliff above Kona Baridi where I soak up a spectacular view of the Rift Valley. There are two trees that I visit there every year and a few minutes spent sitting quietly listening to the wind and the birds and the j angle of distant cow bells is something that I look forward to am would not want to miss. This year I hiked up to the hill with Daniel, Stephen’s nephew who has matured into a responsible young man over the years I have been visiting.

The four generations of this family all living in the compound – from Stephen’s elderly grandmother, Gogo, who still milks the cows to young Charles splashing in a bathtub in the sun in the yard, make me feel right at home. I am privileged to be part of this traditional but progressive and modern Maasai family.

Although I am Canadian to the core, since 1998 I have spent many scattered weeks and months working elsewhere in the world and, to my surprise, have come to think of myself as a global citizen.

One of the great pleasures I have had is developing enduring friendships with people in many communities where I have visited or worked.

In Bosnia I enjoyed the hospitality of several families, and developed ongoing friendships with co-workers during the 11 years that I worked there. My closest associates were Bosniak Muslims, Orthodox Serbs and Croat Catholics. We were all able to get along and work together despite the preceding years of war based on “ethnic” differences.

With my Italian “family”. We chat regularly by Skype and get together every year or two either in Europe or North America.

In Italy, I have friends who have a bedroom in their house that they call “John’s room”. I have enjoyed making pasta with Aunt Bruna, babysat young Enrico when he was a baby and enjoyed special pizza made for me by their friend, Antonio.

In East Africa I have been blessed with cultural nicknames. In Maasai, I am John Ole Moiko Geddes and am a part of the Maasai Oseuri age set. In Uganda I also have been given traditional names of endearment. In western Uganda I have been given the empaako name Amooti. In another part of Uganda I am known as Otim. Emails that I get from there are addressed to Dr. Otim.

I have my own goat in Kenya (her name is Veronica) and have actually developed a little herd of her offspring. When I visit there, my Moiko family can find my goat(s) in their herd and point them out to me. The goats, however, don’t remember me.

I also had a calf given to me a few years ago. The Maasai fellow who did this said he picked this particular animal because it was “weird”. It was a real non-conformist liking to ramble with the other animals, goats and sheep. I took this as a compliment. Culture, colour, race or religion make no difference to me as to who my friends and family are.

Dan learned early on that if he wanted to be part of my family, he had to sport the right T-Shirt.

In Kenya there is a fellow who calls me “Dad”. I hear from him every week (more often sometimes than my kids here in Canada!) and he is Facebook friends with my family, has chatted on Skype with my 93 year old father and has pictures of my grandchildren stuck on the door of his refrigerator.

Having the chance to actually live with families in different communities has definitely given me opportunities to develop close friendships not usually available to “tourists”. These relationships have enriched my life immeasurably.