When I visited my friends, the Moiko’s, in Kenya in January they were having a problem. They are a typical (modern) Maasai family who, in addition to pursuing higher education and communicating with their iPhones and on Facebook, continue to raise cattle. Traditionally, the Maasai have had a strong link with their herds of cows and most of their typical day revolved around tending to their cattle as their main investment. Finding water and grass for their herds, often when water and pasture is scarce, milking the cows in the morning and evening and protecting them from predator animals took most of the Massai herdsman’s time. 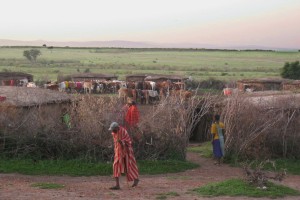 In many parts of Kenya and Tanzania, there are Maasai villages that continue in this tradition. People live in bomas, small collections of mud huts around a central paddock where the animals are kept overnight. During the day, the women look after the children, collect firewood and water, cook and repair the homes while the men and boys take the cattle and goats out to graze.

At Stephen’s place, the children are up early to catch the school bus and Stephen goes off in his car to work at a Food Security program as he finishes his work on a PhD from McGill in Montreal. But at home, there are still the cattle to manage. Hired herdsmen look after the cows and goats but the family still goes to the paddock in the evening to inspect the livestock and milk the cows. It is a nice mixture of modern life with the traditional. I imagine that this blend is not easy to maintain. 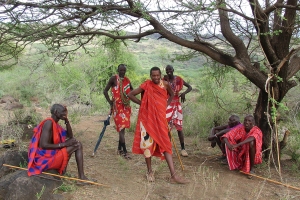 In rural areas, Maasai men, dress traditionally and periodically meet together to “eat meat” and discuss community problems, like predators attacking their cattle.

One of the problems in more rural settings is with predators attacking the cattle. I remember dropping in to a clinic at Talek, near the Maasai Mara, only to be drawn into the small treatment room by the local health care provider who was covered in blood as he sewed up the wounds of a young Maasai fellow who had been mauled by a lion he was chasing away from his cattle.

Nearer to Nairobi, the risk of these larger predators is not as great although I do recall Stephen’s daughter telling me of having to walk past a cheetah on her way up the driveway one day as she came home from school.

The recent problem for Stephen is buffalo that come down from the Ngong Hills to a salt lick in his pasture. They break down the fence and they eat the grass. Buffalo are also a significant security risk as they can be ornery beasts, dangerous to humans. When I visited in January, Stephen was getting tired of mending the fence and wondering what to do.

Well it seems that not far away other Maasai were having similar problems with lions. And this boy came up with a solution. Check it out. I wonder if it will work for Stephen’s buffalo problem.

For the past 9 years, I have made a point of visiting the Moiko family who live just outside Nairobi on wonderful piece of land that has a panoramic view of the Ngong Hills.

I have watched their family grow up and grow in size. Last January when I was at their home, Liz was pregnant and hoping that the baby would come along any day. Little (actually not so little) Charles was born in mid-February and so this past weekend was the first time that we were able to meet. He is a robust, happy, curious child that is well loved and cared for by the extended family that lives at the Moiko compound.

Sandra. a toddler when I first met her, is now a tall 10 year old in Class 6. She goes off to school, six days a week, taking the school bus at 6 am and not getting home until 7 pm. And then there is homework to do. African students spend many more hours acquiring their education than Canadian children do. Education is seen as an important responsibility and opportunity to get ahead.

Another tradition is to hike through the hills to a cliff above Kona Baridi where I soak up a spectacular view of the Rift Valley. There are two trees that I visit there every year and a few minutes spent sitting quietly listening to the wind and the birds and the j angle of distant cow bells is something that I look forward to am would not want to miss. This year I hiked up to the hill with Daniel, Stephen’s nephew who has matured into a responsible young man over the years I have been visiting.

The four generations of this family all living in the compound – from Stephen’s elderly grandmother, Gogo, who still milks the cows to young Charles splashing in a bathtub in the sun in the yard, make me feel right at home. I am privileged to be part of this traditional but progressive and modern Maasai family.

In an earlier post, I mentioned my goat, Veronica. Let me tell you about how she came to be mine.

Over the time I spent with the Canadian Field Studies in East Africa, I became good friends with Stephen Moiko, a Maasai fellow who, I met in 2004. In addition to having a traditional Maasai background (he is the second youngest of 27 in his extended Maasai family) Stephen has excelled in academics and is soon completing his Phd in Anthropology at McGill.

His family lives just outside Nairobi on a home site that was once part of his father’s traditional village. They are gradually acquiring various more modern amenities but still struggle with access to water and have outdoor latrines. Electricity is a convenience introduced to their home only 3 years ago.

I have stayed with this family several times since meeting them in 2004 and the many conversations I have had with Stephen, his wife, his mom and his kids have really helped me understand Maasai culture. 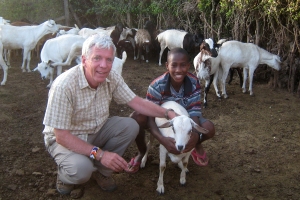 On one visit, young Dennis, a nephew of Stephen’s who lives across the road, was sitting with me in the living area as the solar lights were gradually dimming. He was about 12 at the time and intrigued by this muzungu from Canada.

Our conversation was limited and some of our time was spent sitting side by side in silence.

At some point we started talking about friends. “Who is your best friend?” I asked.

“Right now, you are.” was his answer. He took a Maasai bracelet that had been made by his grandmother off his wrist and gave it to me. “I want you to have this,” he said.

Then he said “And I want to give you one of my goats, too.”

I was flattered but didn’t want the boy to give me something so valuable to their family. “Thanks, Dennis but I can’t take it. You know I live far away.”I said

“Oh, you won’t take it away, I will look after it for you but it will be yours. I want to give it to you as my friend.”

The next morning he took me to the paddock and showed me the goat that was to become mine. It was a healthy young female goat with dark marks over the eyes. “She looks like Veronica Lake,” I said. “Let’s call her Veronica.”

Time has gone on. Dennis is now a young man, having just completed secondary school. Veronica looks a little old and tired but she has had a few kids over the years and Stephen’s mom can still point them out to me. Maasai herdsmen identify their animals by making a unique combination of cuts in their ears to show who owns them. Veronica and her progeny are marked with my unique brand – as part of the Moiko clan. When I visit the family, I always go out to the field to find Veronica and what remains of her extended family. Some of her offspring have, no doubt, become someone’s dinner.

I will always remember the generosity of this young Maasai boy. I still have the beaded bracelet and although I have been given many other beaded items over the years, this is the one that I wear when I visit Maasai communities in Kenya. And Dennis and his grandmother still notice with pride that it is his bracelet that is on my arm. The bracelet reminds us all of the endearing connection we have established despite our quite divergent backgrounds.

I suspect that when I visit them over the years, Maria will point out a goat that is supposed to be one of Veronica’s offspring. I won’t know if they are just humouring me or if it really is one of “mine”. But really, it doesn’t matter. We know that it is a little remembrance that will bond us and that is what is important. 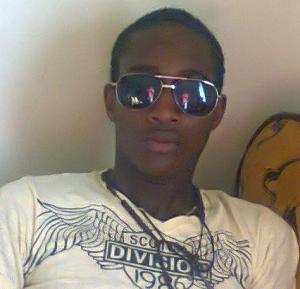 P.S. How cool is this? As a result of publishing this blog article three days ago, my young friend Dennis has found me online and we have had a chat. He is now a young man, attending University in Nairobi. What a Christmas treat for me!!! The internet has shrunk the world beyond belief.