When I visited my friends, the Moiko’s, in Kenya in January they were having a problem. They are a typical (modern) Maasai family who, in addition to pursuing higher education and communicating with their iPhones and on Facebook, continue to raise cattle. Traditionally, the Maasai have had a strong link with their herds of cows and most of their typical day revolved around tending to their cattle as their main investment. Finding water and grass for their herds, often when water and pasture is scarce, milking the cows in the morning and evening and protecting them from predator animals took most of the Massai herdsman’s time.

In many parts of Kenya and Tanzania, there are Maasai villages that continue in this tradition. People live in bomas, small collections of mud huts around a central paddock where the animals are kept overnight. During the day, the women look after the children, collect firewood and water, cook and repair the homes while the men and boys take the cattle and goats out to graze.

At Stephen’s place, the children are up early to catch the school bus and Stephen goes off in his car to work at a Food Security program as he finishes his work on a PhD from McGill in Montreal. But at home, there are still the cattle to manage. Hired herdsmen look after the cows and goats but the family still goes to the paddock in the evening to inspect the livestock and milk the cows. It is a nice mixture of modern life with the traditional. I imagine that this blend is not easy to maintain.

In rural areas, Maasai men, dress traditionally and periodically meet together to “eat meat” and discuss community problems, like predators attacking their cattle.

One of the problems in more rural settings is with predators attacking the cattle. I remember dropping in to a clinic at Talek, near the Maasai Mara, only to be drawn into the small treatment room by the local health care provider who was covered in blood as he sewed up the wounds of a young Maasai fellow who had been mauled by a lion he was chasing away from his cattle.

Nearer to Nairobi, the risk of these larger predators is not as great although I do recall Stephen’s daughter telling me of having to walk past a cheetah on her way up the driveway one day as she came home from school.

The recent problem for Stephen is buffalo that come down from the Ngong Hills to a salt lick in his pasture. They break down the fence and they eat the grass. Buffalo are also a significant security risk as they can be ornery beasts, dangerous to humans. When I visited in January, Stephen was getting tired of mending the fence and wondering what to do.

Well it seems that not far away other Maasai were having similar problems with lions. And this boy came up with a solution. Check it out. I wonder if it will work for Stephen’s buffalo problem. 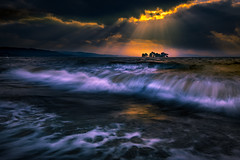